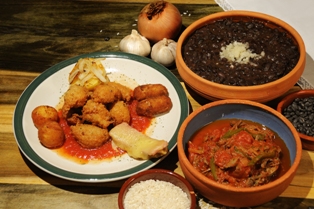 The spicy inclination in the authentic Cuban recipes seemed to have originated from Spanish and African style cooking. It is in these regions that you will find that people are quite fond of spices in their food. When it comes to spice and flavor the Caribbean influence is quite obvious. There are some variations in the regional cuisines of Cuba for example Havana is known to have a cuisine somewhat influenced by the Chinese!

The Ropa vieja is one authentic Cuban recipe that consists of a shredded flank steak in a tomato sauce base. It is served with black beans and yellow rice along with some plantains and fried yuca. The basis of criollo cooking seems to belong to the Eastern part of Cuba. This form of cooking has very much in common with the Caribbean cuisine with the only major difference being that the use of peppers is not there. Garlic, cumin, onion and bay leaves form the basis of the spices in this form of cooking. Rice and beans form the basis of the typical meal in Eastern Cuba along with the preferred meat and a simple salad. The meat is usually accompanied with sauces out of which the most popular sauce is Mojo or Mojito. This is made out of garlic, oil, onions and spices. Boliche is another famous recipe for a beef roast that is known to resemble torn up clothes. Along with all these recipes as part of the cuisine of Eastern Cuba there are soups made from black and red beans which are very famous.

Western Cuba also shares the same cooking style but has some unique differences with its counterpart. You will find that this part of the island has both European and Chinese influences. Sopa china is an egg and onion soup and arroz stalteado is a dish of salted rice that seemed to have Chinese influences. On this side rice and beans are consumed separately and the use of flour is much more common. Alcaparrado is a mix of olives and raisins which are used to provide a sweet and sour taste and you will find it to be used in this part of Cuba especially in their sauces. It is often used with popular finger foods such as croquetas made from ground beef, papa rellenas and picadillo a la Habanera along with ninos envueltos. These dishes are mainly beef oriented with each having a different twist to it. Along with these recipes Cuba is famous for inventing one of the world’s most loved sandwich recipes.