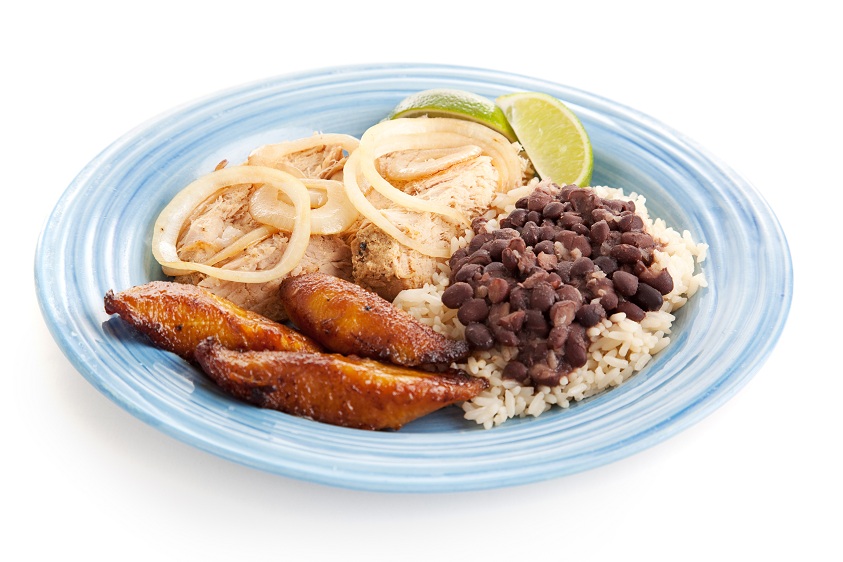 Are you going on holiday to Cuba? Do you want to know what food you should try while in Cuba? Our guide to food in Cuba gives you the information you’ll want to know.

The population of Cuba is a mixture of people of both African and Spanish origins and this is reflected to a great extent in the local cuisine. Food in Cuba is not typically Caribbean and stands out from the food one might find in Jamaica or elsewhere in Latin America. Cuban food is characterised as being typically hearty and often quite heavy and fattening. It is not usually hot and the exotic spices that one would ordinarily associate with cooking in the West Indies are hardly used at all in Cuban food. Cuban cuisine relies heavily on onions and garlic for its flavourings, and these two ingredients are more or less ubiquitous in Cuban dishes.

The staple foods eaten in Cuba are beef, pork, chicken and fish as sources of protein. Carbohydrate sources usually consist of a mixture of rice and beans with potatoes used only rarely.

For a country that has suffered so greatly under US sanctions for decades, Cuban food surprisingly still contains a lot of meat. Cuban people love meat in their food, and it is very rare to find a dish that doesn’t contain some kind of it. The most common types of meat found in Cuban food are beef, pork and chicken. Beef is slightly harder to come by because all livestock in Cuba is government property and therefore subject to official rationing and regulations.

Cuban food does not offer a wide selection for vegetarians. Most  Cuban dishes involve eating some kind of meat and the concept of being a vegetarian for religious, ethical or health purposes is not well known. Vegetables do not feature heavily in the cuisine although there should usually be sufficient amounts of fruit available from which to obtain vital vitamins. Otherwise, vegetarian food in Cuba is limited to a few dishes consisting of rice and beans.

Snack food on offer in Cuba can be quite good, if not a bit mundane. The main types of snack food on sale from stalls in Cuba are pizzas and sandwiches. The government does operate pizza shacks in most towns in Cuba, although the quality of food on offer here is not brilliant. Some Cubans sell snack foods from their own homes and you can notice these by the actual foods that are displayed on the window.

The main dessert eaten in Cuba is ice cream. Cubans eat their ice cream with condiments such as chocolate or caramel sauce on top, and this is sold at government stores. Another popular dessert is ice shavings soaked in sweet syrup.

The standard of food and service at restaurants in Cuba is often not very good. The bigger foreign hotels are the place to get the best quality food in Cuba, although the cuisine will not always be Cuban.