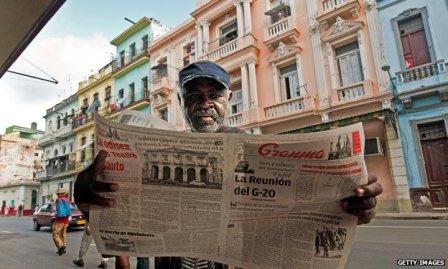 Are you interested in the media of Cuba? Want to know about the best TV & radio stations, newspapers and magazines in Cuba. Our guide to media in Cuba gives you the facts & information you’ll want to know.

Like everything else in Cuba, the media is heavily state controlled. There are Cuban newspapers and radio shows that broadcast in Spanish out of Miami, although these serve mainly the Cuban exile community in the USA. The main taboos that concern censors in Cuba are criticism of the socialist system of government in Cuba. Otherwise, there is a fair degree of autonomy as to what can be printed or broadcast in the media of Cuba.

Cuba has two national TV media channels. Tele Rebelde and Cuba vision both broadcast nationally across Cuba and show a variety of programs. Programs shown through these state controlled media outlets in Cuba include documentaries about industry and agriculture as well as sports and news programs.  One advantage of having TV media channels that belong to the socialist government of Cuba is the complete lack of advertising that viewers in Western countries have to suffer. The downside of these media outlets in Cuba is that far from broadcasting 24 hours per day, these TV media stations only broadcast for a few hours every day. Broadcast times for these media outlets vary throughout the week so it’s not worth staying in to watch TV in Cuba. In addition to the two national TV media channels, there are several local TV stations that broadcast on a regional basis in Cuba.

Cuba has a total of 64 radio stations, many of which broadcast 24 hours a day 7 days a week. Most of these radio media outlets in Cuba are local stations concerned primarily with news and developments in the local region of Cuba, although there are national media radio stations operating in Cuba. One such station is radio Granma which broadcasts internationally in both Spanish and English. This revolutionary media outlet is named after the boat that Cuban president Fidel Castro and his comrades travelled to Cuba in when they were rebels. Radio Granma broadcasts from Tuesday to Saturday. As part of its revolutionary media campaign, radio Granma in Cuba also broadcasts in a host of European languages.  More recently, radio Taino has been launched in Cuba in a bid to cater to increasing numbers of tourists from Europe and North America. This media outlet broadcasts in the English language in Cuba 24 hours per day.