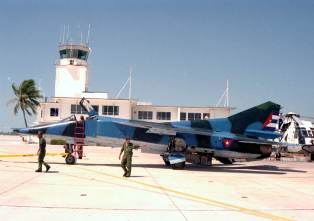 Interested in Cuban Air force Planes? Want to know what planes are used by the military in Cuba? Read our guide for more facts & information…

Air and Air Defense Force (DAAFAR) are the primary agency handling Cuban air force planes and its flying and maintenance.  Cuban air force owns many planes designed and manufactured by erstwhile Soviet Union and then Latin American countries. During 1980s, Cuba showed the air powers to countries in Africa with the help of Soviet Union. During this period Cuba dispatched many fighter planes to African countries such as Angola and Ethiopia to execute many aerial attacks on South Africa and Somalia respectively.

Cuban Air force fighter planes which are in use include MiG-29UB. They had owned the Hawker Sea Fury, MiG-15, MiG-17, MiG-19, North American P-51 Mustang and North American B-25 Mitchell. It is estimated that at present Cuban air force has about 230 fixed wing aircrafts. There are thirteen military bases in Cuba. The Cuban air force planes are distributed and stationed at these stations. The exact picture of Cuban air force assets are not known to the open world.

A recent assessment in 2007 states that Cuban air force has 8000 personnel, 31 combat airplanes, and other 179 aircrafts. The 31 combat flights consist of 4 MiG-21s, 24 MiG-23s and 3 MiG-29s. Cuban air force planes also include transport aircrafts and helicopters for surveillance.