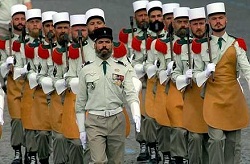 The French foreign legion is an elite unit of the French Army and was formed in 1831 as a separate foreign volunteers unit by French King Louis Philippe. The main function of this legion was to protect and help in expanding the French colonial forces. The French legion has also fought in the major battles involving France including both World Wars and the Franco- Prussian War in 19th century.

Every military unit has its distinct dress style and the French legion also has its unique uniforms. Some of the important items which constitute a French foreign legion uniform are listed below:

White Kepi: The kepi is a type of cap and it has the shape of a flat circular top with visor. The White kepi is an essential part of the French foreign legion uniform and soldiers wear it with panache. The history of the white kepi can be traced back to Africa where it was first worn by French soldiers in their Africa posting to protect them from hot sunrays. Since then it has been an important part of the French foreign legion uniform.

In 1914 the visible colors of  the Kepi were hidden by a blue grey cover. After that the kepi was replaced by folding forage caps, but legion officers have always worn their kepis behind the lines. Due to the wearing of Kepi with French foreign legion uniforms, legions are sometimes called Képis blancs or white Kepis.

The Legion Grenade, which is the emblem worn on the Kapis of legionaries consists of seven flames burning from a single hollow circular source  in different directions which represents an old style of hand grenade and is also worn, in varying forms, by other military and police forces.

French foreign legion use red and green colors while they are serving the French Kings.
The blue sash for which legionaries are also recognized was originally worn under the clothes to protect against any intestinal disorders that may have occurred at the war front. With leather apron and an axe, it is now an integral part of the French Foreign Legion parade uniform.