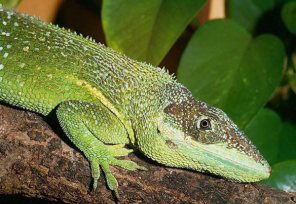 Want to know more about the Cuban anole? Read on to find out how Cuban anoles differ from geckos and chameleons…

Cuban anoles are often mistaken for iguanas and geckos but they are not even related to these reptiles. The Cuban anole is part of the polychrotidae species which is a classification of lizards. There are basically four subspecies or genus in this category which are the Polychrus, Norops, Anolis and the Phenacosaurus which fall in the same sub family of the polychrotidae.

The reason why the Cuban anoles are mistaken for chameleons or other reptiles is because they also have the trait which allows them to change the color of their skin and blend into the environment while also gliding up walls like geckos.

Natural Habitat of the Cuban Anole

These small sized lizard-like creatures are found profusely in the Caribbean, southeastern areas of America as well as many other countries in the West. The general color of this species is green and in fact one of the species is called the green anole and is endemic to North America only.  Brown Cuban anoles have spread as far as eastern Texas and in fact a stable population has been scouted from the year 2005 onwards in Houston.

The Caribbean region like Florida and Cuba are flooded with the Cuban anole which are brown in color and have actually populated the Caribbean region densely and managed to drive the Carolina anole species towards the northern areas by taking over their territory.

Territorial Behavior of the Cuban Anole

It is interesting to see how two species co-inhabit the same territory. If the brown anole coexists with the green anole in the same surroundings then the brown Cuban anoles will move to the lower region of the bush because they are terrestrial in nature. Conversely the green anoles move higher towards the upper branches of the bush.

Blending Into the Environment

The anoles can change their coloration depending on the fluctuation in their moods and the territory that they are living in. This allows them to blend in to the territory as well as warn others by changing color.

There are different kinds of anoles propagating the Western world and have names like the Cuban brown anole, knight anole as well as bark anole.

Although each of these lizard-like creatures can change their colors and morph into their surroundings their ability to do so differs vastly based on their species. The green anole is known to alter its color from bright green hues all the way to deeper greens as well as brownish colors. However the Cuban anole which is basically brown in color can only alter its shade of brown into different deeper tones of brown and morph the pattern on the back.Anoles range from 3 to 7 inches in length and only the largest species which is known as the Knight anole can cross 12 inches to 20 inches in length.