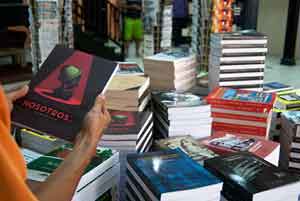 Cuba during the 19th century was still under direct colonial rule from Spain and this was, to an extent, reflected in the literature of Cuba during this period. Of coarse black literature in Cuba would have been almost impossible to flourish at this time, not least because of the fact that Cubans of African origins were predominantly uneducated. One noteworthy exception to this was Gabriel de la Concepcion Valdes. This Cuban poet was a mulatto who was self educated and became quite a prolific name in the literature of Cuba during his time. The subject matter of his poetic literature was mainly romantic although his life was embroiled in political struggle. Valdes was eventually sentenced to death by firing squad by the authorities for the part he played in a slave uprising at Matanzas in Cuba.

Cuba has produced a few noteworthy names in the field of narrative literature throughout its history. One such name is Cirilo Villaverde de la Paz. This Cuban novelist is remembered primarily for his political struggles rather than his literature in Cuba as he was a fierce opponent of colonial rule and was actually imprisoned for the stance he took. He also spent many years in exile in the United States.

Another famous name in the literature of Cuba dating back to the same period in history is the novelist Cecilia Valdes. Valdes’ most famous novel tells the story of a young white man who had an illicit relationship with a young mulatto woman only to find out eventually that she is his half sister.

Probably the most famous name in revolutionary literature in Cuba is Jose Marti who lived from 1853- 1895. Marti was eventually deported to Spain for his revolutionary writings which were deemed to be a danger to the colonial authorities in Cuba. Marti amassed a considerable 25 volumes of assorted poems and essays throughout his literary career both in Cuba and Spain.

Alejo Carpentier in many ways picked up the mantle from Marti and played his role in the field of revolutionary literature in Cuba during the 20th century.  Much of his literature was written outside of Cuba when he lived in exile prior to the revolution in Cuba. After the revolution, Carpentier returned to Cuba where he assumed the important position of head of the national publishing company, presumably having a great say on what literature was or was not published in Cuba. The literature of Carpentier is noted for its emphasis on the importance of Afro-Cuban culture which had obviously not been encouraged under colonial or pre revolutionary authorities in Cuba.

Cuba 0 8
Would you like to buy some Cuban cigars on your holiday to Cuba? Want

Cuba 0 6
Whether its bird watching, Wildlife appreciation or ecotourism, the national parks of Cuba have

Cuba 0 28
Are you going on holiday to Cuba? Do you want to watch a sports

Cuba 0 4
Are you going on holiday to Cuba? Perhaps you’re thinking of driving around the