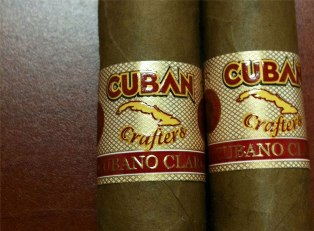 Cuban cigars are among the most coveted of luxuries for those who enjoy cigars and cigar accessories. Cuban Crafters supplies the best in hand rolled cigars, handcrafted humidors, cigar cutters, cases, and many of the other fine items that accompany

However, Cuban Crafters buys from Tabacalera Esteli, one of the finest tobacco growers in the world to grow their superior quality tobacco and hand craft cigars at their plantation in Nicacaragua. The cigar rollers at Tabacalera Esteli were trained by Cuban master rollers. The taste, aroma, and bouquet of Cuban Crafters cigars are extremely sought after for their quality that is about as close as you can get to real Cuban cigars in America.

Cigars purchased from Cuban Crafters come with a money back guarantee. The fine tobacco in these cigars is made to be smooth, invigorating, and thoroughly enjoyable. For people who have experienced real Cuban cigars yet can’t get them, Cuban Crafters cigars are to some the best possible alternative. For those who have never tried a true Cuban cigar, Cuban Crafters provides simply the highest quality small batch and boutique cigars avaliable.

Cuban Crafters’ cigars are individually handmade. They are crafted in small batches with every attention to detail paid. The quality of these cigars is second to none. Before they are sold, they undergo extensive inspection and comparison to the top cigar standards in the world. It takes a lot of work and skill to make the cigars sold at Cuban Crafters, and once you try one of them, you’ll know the feeling of indulging in a truly world class hand crafted cigar.

If you’re in Miami, you can visit the Cuban Crafters’ store on Northwest 7th Street from 9 a.m. to 7 p.m. Eastern Time. But if you can’t get to Miami, Cuban Crafters has a website from which you can order the finest cigars available in the U.S. Cuban Crafters ships for free on U.S. orders of over $200.00.