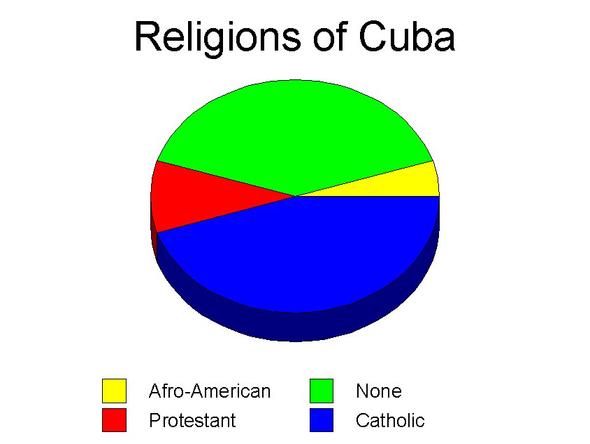 Religion in general has been given little importance in Cuba since the revolution in 1959. The communist ideals harboured by the Government of Cuba are not compatible with the promotion of religion so the relation between state and religion has been tense in Cuba for decades. Slight improvements have been made over the past 10-15 years since the end of the Cold War. In the early 1990’s the constitution of Cuba was amended so that rather than being an Atheist state, Cuba is now a secular state. This has been a positive step for the followers and proponents of organised religion in Cuba and afforded an increased amount of room in which to be active in the field of religion inside Cuba.

A large number of people in Cuba follow a religion that is a blend of African and Christian religions. The origins of this religion date back to the slave period when Africans would not have been allowed to practice their own religion. Instead, they ingeniously fused the beliefs of their African religion with Christian ritual and iconography so as to make it appear to their Catholic slave masters that they were now converted to the religion of their masters. Over time the clandestine nature of the religion became lost and followers of this religion in Cuba saw the Christian imagery and practices as part of their religion.

There are small numbers of followers of the Protestant branch of the Christian religion in Cuba. The largest of these religious groups is the Baptists, whose operational set up was damaged much less than the Catholics in Cuba due to the facts that it was less of a threat and also most of its pastors were natives to Cuba.