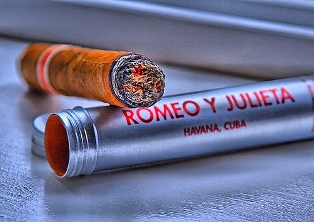 Romeo y Julieta cigars (also known as “Cuban Romeo and Juliet”) have been made in Cuba since 1875 and are considered some of the very best hand-rolled cigars in the world. Cuba nationalized the brand after the 1959 revolution and continued to make

Cuban Romeo and Juliet, or more accurately, Romeo y Julieta is the name of a famous Cuban cigar brand. There are actually two producers of Romeo y Julieta cigars: one in Cuba and the other in the Dominican Republic. The brand started out in Cuba in 1875 and won a number of awards at various tasting exhibitions. In 1903 the brand was acquired by a man named Jose “Pepin” Rodriguez Fernandez, who had been the head of the Cabanas factory in Havana. Rodriguez traveled widely in North America, South America, and Europe to promote the brand. He also owned a racehorse, Julieta, that he entered into racing events worldwide.

Rodriguez was an exceptional salesman, and his cigars became wildly popular among the rich. One of those wealthy customers was Sir Winston Churchill, after whom cigars with a length of 7 inches and a diameter of 47/64 inches (this would be a cigar band gauge of 47)  were named. In 2006, the short Churchill Romeo y Julieta, a “Rubusto” was introduced to the Romeo y Julieta lineup at the Habanos Festival in Havana. A Robusto cigar is roughly 5.5 inches long with a 50 to 54 gauge band.

For many of his wealthy clients, Rodriguez made personalized bands for their cigars. At one time there were around 2,000 different personalized cigar brands made for customers. Romeo y Julieta specialized in figurado cigars, which are irregularly shaped cigars that are pointed on one end.

Rodriguez died in 1954 at the age of 88, and the Cuban Revolution took place in 1959. At that time the tobacco industry was nationalized. The brand moved to the Dominican Republic, where Romeo y Julieta cigars are still produced for the American market. But Cuba also nationalized the brand and continued to produce it there as well. Cuba still distributes Romeo y Julieta cigars worldwide.

The word “vitola” refers to the size and shape of a cigar, and Romeo y Julieta produces 20 different vitolas plus a few limited edition vitolas. The names of some of them include Belvidere, Cedro Deluxe, Churchill, Mille Fleur, Regalia de Londres, and Sport Largo. These are all handmade, but the company also makes three different machine-made cigarillos (short, narrow cigars): minis, clubs, and puritos.

Each cigar is made up of three types of tobacco leaves: wrapper, filler, and binder. Each has its own characteristics, and the three must blend together perfectly to make a good cigar. Cuban varieties, like Colorado Claro, Colorado Maduro, and Oscuro are three of the most highly rated tobaccos in the world.