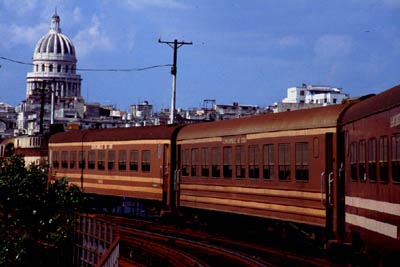 Are you travelling to Cuba on holiday? Do you want to know how to get around Cuba using the trains? Our guide to trains in Cuba gives you the facts & information you’ll want to know.

Cuba will provide veritable delights for all train enthusiasts. Cuba has a long and historic use of trains which were originally used as part of the sugar cane industry. The trains were used primarily to transport sugar cane from the inland plantations to the sugar refineries near the coast.

Trains do not feature very heavily in the sugar cane industry anymore, but they are still used as a viable means of public transport in Cuba. The national rail company of Cuba operates a service that regularly connects all provincial capitals of Cuba to each other. Train connections usually run at the rate of one per day and only quite large towns in Cuba are served by train. Trains are usually less crowded and more comfortable than buses in Cuba.

Trains and the embargo in Cuba

The trains used in Cuba are, for the most part, old 19th century steam locomotive trains, which exude nostalgia and plumes of smoke simultaneously. The reasons why such ancient trains are still used today in Cuba are largely down to the US imposed trade embargo which makes it very difficult for Cuba to buy new trains. Unfortunately this has led to dilapidation in the train services in Cuba over recent years due to fuel shortages and the inability of the government in Cuba to purchase new parts for the trains.

One advantage of travelling by train in Cuba, in comparison to using buses in Cuba, is that the train stations in Cuba are very conveniently located. The train stations in most provincial capitals are usually situated in the city centre or very near making it easy to arrive at your final destination.

Cuban nationals pay for their train tickets using Cuban money, while foreign tourists in Cuba will be expected to pay for their train tickets using dollars. Although the price foreigners are expected to pay is obviously much higher than the price paid by Cubans, travelling by train still represents good value for money, considering the comfort level you are likely to experience.

Catering on trains in Cuba

If you are travelling on a long train journey in Cuba it is always a good idea to pack some food to take with you. There are often catering services available on board trains in Cuba, although the choice of food is often quite limited.