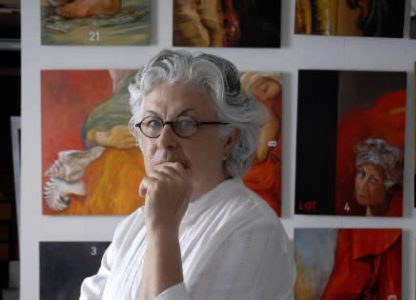 Are you interested in knowing about the contemporary Cuban artists. Lydia Rubio Ferrer, a native of Havana in Cuba, was born on March 20, 1946 and is the most appreciated Cuban artist. Here you can see more about her accomplishments….

Lydia Rubio lived in many cities in different countries. She spent time  in Puerto Rico, New York, Boston and Italy. She traveled to many parts of the world and promoted Cuban arts. Presently she is a resident of Miami, Florida.

Lydia Rubio is one of the few famous Cuban artists widely known outside Cuba. She has been in the field for more than 25 years with astounding successes in Cuban arts. She has produced many works, led 13 solo shows and was part of 55 group shows performed on the regional and national levels. Bernice Steinbaum Gallery in Miami (2001), ” Written on Water ” in  Joyce Goldstein Gallery, New York, “Lydia Rubio. Projects Room”, ” The Alphabet ” in Bridgewater Lustberg Gallery, New York (1998) and Gutierrez Fine Arts 1995, Miami are some of the famous public exhibitions by Lydia.

A recipient of the 2006 Pollock Krasner Fellowship, Lydia Rubio has been awarded with many prestigious awards and fellowships for her valuable contributions to the Cuban arts. She received Individual Artist Fellowship in Painting in the State of Florida in 1994 and also received the Cintas Foundation Fellowship in 1982.

She has been engaged in two major large scale public art works. The public art sculpture, Raleigh Durham Airport Terminal C commissions and the Woman Park in Miami Dade County are two important activities she had concentrated on in the recent past.  Her valuable paintings, art texts and sculptures were displayed in Public places commissioned by Dade County Art Gallery. Also her works were attractively used for the Port of Miami.

Many published works of this world known Cuban artist are available in periodicals. The periodicals in which Lydia Rubio’s works were published include Harvard GSD Magazine, ARTNews, The Miami Herald, Elle Décor, Hemispheres Magazine UA, the State of Florida, Americas Magazine OEAS, and Southern Accents.