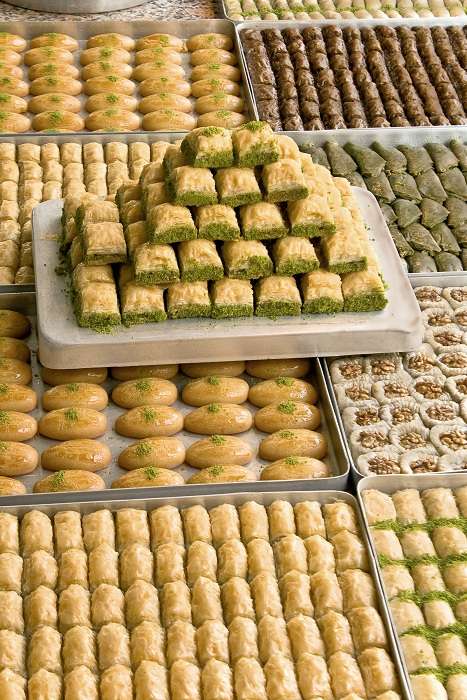 Desserts were a very important part of the Egyptian cuisine. Traditionally a large variety of Egyptian desserts were made in the form of pastries and puddings and almost all of them were drenched in honey syrup.

Baklava is without a doubt one of the most widely consumed Egyptian desserts. In fact Baklava has been a popular dessert in a number of Arab countries. The basic ingredients for making the Baklava are filo, nuts, dough and honey. Baklava is regarded as being on of the lesser sweet desserts.

Fatir is another popular and widely consumed Egyptian dessert. The Fatir is very much like the American pancake and is stuffed with a wide variety of ingredients. Apricots are by far the most popular when it comes to fruit fillings for the Fatir. In other cases egg filled fatirs are also considered to be quite the delicacy.

When it comes to the extreme sweet treats of Egypt then the Basbousa is definitely worth mentioning. This is basically a semolina pastry in a different shape. As is popular in Egypt the pastry is soaked in rich honey and then generously topped with fresh hazelnuts.

The Egyptians actually have a national sweet dish known as Umm Ali. This is basically a raisin cake which is very simple to make. It is traditionally served totally soaked in milk and is best when hot.

Amongst the unique Egyptian desserts is Kanafa. This dish is basically composed of batter strings that are fried upon hot grills. A wide variety of stuffing is used to add flavor to this dessert including nuts, sweets, and even meat depending on whether you want a sweet version of the Kanafa or otherwise.

The Egyptians are also renowned for their rice pudding. It is definitely one of the most popular Egyptian desserts with the tourists. Known as Mahallabiyya in the local language it is commonly served with fresh chopped pistachios as topping. Also amongst the list of Egyptian desserts is the Gatoux, which are basically French style pastries.

Other than the above mentioned examples the Egyptians commonly consume fresh fruits to satisfy their sweet tooth at homes. Desserts, in one form or the other are always part of meals on a daily basis.