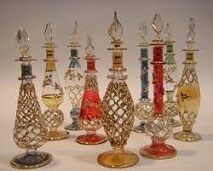 The Egyptians have persevered many ancient traditions and techniques of making hand made products. One of these prized trends that have been maintained over the years is the art of making glass perfume bottles.

Many of the ancient handicrafts from Egypt like painted papyrus and alabaster objects are no longer hand made. Rather they are mass produced using machinery for the masses. On the other hand the practice of hand blown glass perfume bottles is still the same and in fact this art form has been perfected over the years to become a very pure art using which extremely ornate and exquisite glass perfume bottles are produced.

The Egyptians have been fond of working with glass since their earliest civilizations. They had access to natural glass that came into existence because of volcanic actions prior to learning how to make it themselves. The Egyptian civilization is not credited as being the innovators of man-made glass but they are credited for producing exquisite glass products through the process of hand blowing.

The first hand blown glass vessels appeared in Egypt back in the 2nd millennium BC. They seemed to have appeared simultaneously in Egypt and Mesopotamia. The method employed to create these vessels was one in which the bottles were molded on a core. At this point in time the Egyptians had not developed the technique of glass blowing. Rather they would create cores in the form of the vessel that they wanted using a material that had the potential to withstand extremely high temperatures as it was put in flames to derive the end product. They used viscous glass for this technique. Once the vessel was in form they would decorate it using threads of different colored glass which were used to create patterns.

Once the bottles were decorated they would be made to roll on a flat surface following which they would add the base and the handle. Making bottles in this manner required exceptional skill.

The technique of glass blowing was invented later on. According to this method a piece of molten glass would be made to stick to one of the ends of a blow pipe. Pressure would be exerted from the other end which would cause the glass to come into the shape of a bottle.

Following this the Egyptians would add the decorations by a process of pinching the glass while it was still hot. Simple decorations were added first up following which they could be pinched in order to create intricate designs and complex patterns.