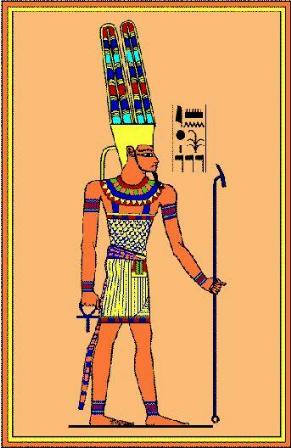 Want to learn more about the Egyptian god Amun? Read on for a historical overview of Amun and how he rose to power becoming one of the most important Egyptian deities…

The story of the Egyptian God Amun is a very unique one according to ancient Egyptian mythology. Amun started out as an ordinary deity who slowly rose to power eventually becoming one of the most significant deities for the Egyptians following which he disappeared into the shadows forever.

Amun as the God of Air

During the initial period Amun was simply considered to be the personification of air. In terms of the hierarchical position Amun was not considered to be very significant although he was a fundamental part of the four concepts that the primordial universe was composed of. The name Amun actually translates as “the hidden one”. In this regards it goes hand-in-hand with his function as it reflects the fact that air cannot be seen.

Amun was also part of the Ogdoad and as its member he was usually depicted as a frog or as a human with a frog’s head. In terms of symbols the Egyptians would make use of the color blue so as to represent the invisibility of air for Amun. Amun also had a dualistic female aspect as did all other deities that were members of the Ogdoad. In the case of Amun his female counterpart was Amunet, which is a feminine form of the original name of the deity.

Amun as the Creator

With the passage of time the significance of Amun rose in the eyes of the Egyptians. From being the god of air Amun was now being considered as the breath of life. It was believed that the breath of life was responsible for creating the ba. Soon enough he acquired the status of being a creator God amongst the Egyptians of the first intermediate period. His female aspect was now being considered as his wife which consequently made her the divine mother of all creation as the source of Cosmos in the universe.

The description of Amun also changed according to his role. Now more so than ever before he was being depicted in human form set upon a throne with a deep circlet crown on his head that would rise up in two parallel plumes symbolizing the tail of the world. This unique crown was indicative of Amun’s previous domain as the god of air.

Amun is also considered as being the father of another Egyptian deity known as Menthu who was the war god of Thebes. More detailed accounts of Amun reveal that his wife was actually infertile and thus Menthu was the adopted child of the pair. Later on the adopted son was actually replaced by another deity known for being the Moon God, Chons.

By the 18th century Thebes had become the most important city in Egypt. As this happened to be the center of the cult of Amun, the deity rose in importance on a national level. Egyptian pharaohs started giving much reverence to Amun and believed that their success was because of him. Temples for Amun were extravagantly decorated by the pharaohs and this gave the Greeks the impression that Amun was the king of all gods in Egyptian mythology.

Although Amun was never actually considered to be the king of all gods by the Egyptians he was regarded as being the bringer of justice and the care taker of the poor.