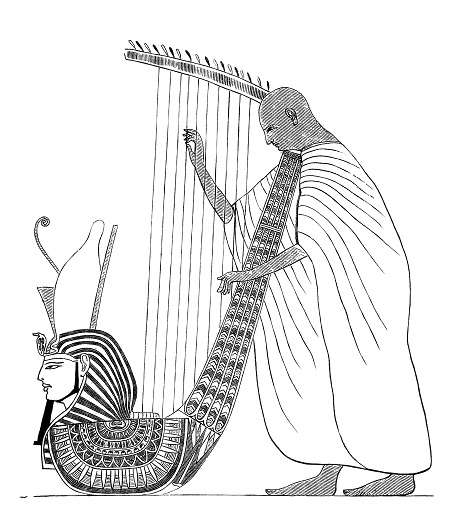 Want to learn more about the Egyptian harp? Read on for facts and info on this ancient instrument and find out about the different constructions of Egyptian harps…

Music was an integral part of ancient Egyptian civilization. The Egyptian harp is considered to be one of the oldest instruments to be used by the Egyptians. The use of the harp was widespread and it can be seen depicted on a large number of ancient Egyptian paintings. A few specimens have also managed to survive since the ancient days.

The harp was basically designed in two different ways. These included the angle harp and the arched harp. However the later harp came into widespread use all across Egypt. The harp consisted of a sound box that was connected with a curved rod. The smooth curved rod was embedded with collars that would hold different strings in position.

In order to attach the strings to the collars they needed to be stretched between both ends. A rib had to be placed in contact with the skin of the sound box in order for them to produce sound. The angular harp could be tuned by rotating the collars which would in turn increase or decrease the tension on the strings.

The construction of the angular harp on the other hand was based around an oblong shaped box which had a hole in middle through which a rod would be made to pass. This unique construction produced a sharp angle between the sound box and the rod. It is believed that this particular design for the harp originated in Eastern Egypt during the New Kingdom era.

How to Play the Egyptian Harp

The vertical sound box of the harp had to be placed adjacent to the chest of the individual. In order to produce sound from the harp the musician had to strum the strings or gut with their fingers. Unlike modern day picking, Egyptian harp players utilized the technique of finger picking.

Cedar was the most popularly used material for making the sound box. The Egyptians would decorate the sound box by giving it a leather coating and then decorating it with patterns and designs often featuring a composition of flowers or a phoenix. Perhaps the best surviving example from the collection of ancient Egyptian harps is the Louvre harp which is regarded as being an extremely important artifact by Egyptologists.

The use of the arched harp was prevalent even in the Old and Middle Kingdom. Their size and shape continued to be modified with the passage of time. It was in the New Kingdom that the arched harp went through many modifications and was also joined by the angular harp from the east.

The newer designs seemed to be quite different than the older shovel harp construction. In terms of their construction they compared to a bow yet retained the smooth curves from the arched harps of the Old and Middle Kingdom.

The reason why arched harps were preferred by the Egyptians was because they saw in them a reflection of the architectural sensibilities that were prevalent during the Pharoanic ages. It was with the advent of the Greco Roman influence that the new designs were developed.