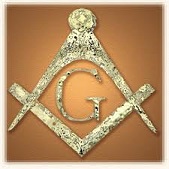 Free Masonry as it currently stands and by their own definition is the largest fraternity of men united under the Supreme Being. Through out the ages, anti Masonic sentiments have been harbored by various religious factions. The Masonic order has been branded as satanic, rationalist and naturalist by the church while Islam also shares similar sentiments about the order.

The origin of the order and its early development are often debated, however the fraternity did and does place importance on certain symbols. The origins of many of these symbols can be traced back to ancient Egypt. As a matter of fact many of the coveted beliefs of free masonry are in alignment with the beliefs of the ancient Egyptian Religion. The most prominent among these beliefs is the acceptance of the omnipotence of matter. Some of the most conspicuous and common among these symbols are discussed below.

The Pyramid:  This symbol is often seen in Masonic building and publications. It represents the great pyramid of the cheops. This symbol was highly revered by the ancient Egyptians and stood for the beginning of life from the sea of Chaos. It also speaks of the Masonic espousal of the philosophy of the search of light of the ancient Egyptian Pharaohs.

The All Seeing Eye: Is the Masonic Rendition of the eye of Horus or the Eye of Ra. The Egyptians believed that the symbol had protective powers while the masons believe that the symbol is representative of a masons deeds and thoughts always being watched by the Supreme Being.

The Six Pointed Star: In ancient Egypt this symbol stood for the confluence of two great powers. The Masons also believe that two powers come together in the symbol, many have interpreted the symbol as the coming together of the male and female forms with one triangle representing the phallus while the lower triangle represents the triangular female mound. If one were to erase the upper and lower bases of the triangle you would come upon the most popular symbol of the Masonic tradition that of a compass and a square.
The Lotus: In Masonic tradition this symbol stands for spiritual enlightenment. The ancient Egyptians believed that the lotus represented life and resurrection.

The Two columns: Most Masonic temples and structures have two symbolic columns; the origins of these structures can again be traced back to ancient Egypt. The first connotation is related to King Solomon and stands as a symbol against the corrupt insinuations against him. They also are symbolic of the twin architects Set and Horus from the ancient Egyptian pagan religion. They stand for the pillars of intelligence and power beyond which lies the gate to eternity.

These were just a few symbols related to the Masonic ideas and ideals. However the mason’s rigid belief in these symbols often caused them to be accused of being Satanists. The secrecy shrouding the brotherhood has often proved detrimental with many members being ostracized for being a part of the fraternity. Needless to say, these symbols hold different connotations for the fraternity and for the outsiders.