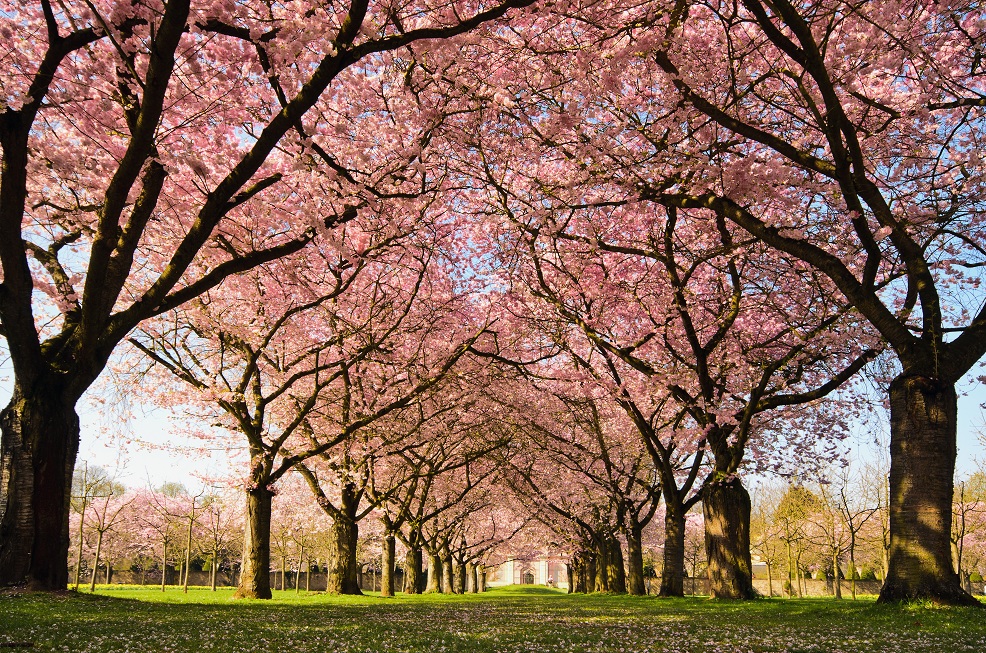 Cherry trees and their blossoms in Japan go by the name of sakura and carry a great cultural meaning and significance for the people of Japan. The word sakura would translate as the Japanese flowering cherry tree in English whereas the blossoms are referred to as cherry blossoms.

The cherry blossom trees produce the wonderful fruit of cherry which goes by the name of sakuranbo in Japan. This fruit actually comes from another species of the tree.

History and Symbolism of the Cherry Blossom Tree

Flower viewing was a phenomenon that the Japanese adopted from China during the Heiran Period. Poets, singers, aristocrats and members of ordinary households would come together to gather around cherry blossom trees and appreciate their beauty. Over the years the tree became a highly revered species in Japan.

The cherry blossom tree is known for its short yet brilliant blooming season which ends with an inevitable fall to the ground. For the Japanese masses this drama staged by the natural process of the tree was reminiscent of the natural way of human life where rise and fall are the main elements in limited time.

Along with being a metaphoric representation of life in general, the cherry blossom tree is believed to have deep connections with Buddhism. According to the dharma the tree was associated with the concept of ‘mono no aware’ ever since the 18th century.

The richly symbolic sakura served as inspiration for many artists who produced art work based around the Japanese cherry blossom tree. From musical performances to stage plays and amazing paintings to profound poetry the cherry blossom tree has managed to make its mark in many ways on Japanese culture and tradition.

Today we find that the tree is used as a symbol on many contemporary items as well. The representation of the cherry blossom tree in the form of patterns or logos can be seen on clothing accessories, stationary and even dishware.

The Japanese have a wide collection of symbols that are believed to bring them good luck. The cherry blossom tree is one of the most popular good luck symbols in Japanese tradition. Generally speaking the tree tends to evoke a positive response in anyone who tries to associate themselves with any aspect of the Japanese cherry blossom tree.

Australia
Searching for a cast aluminum garden bench in Australia? Find out about different designs