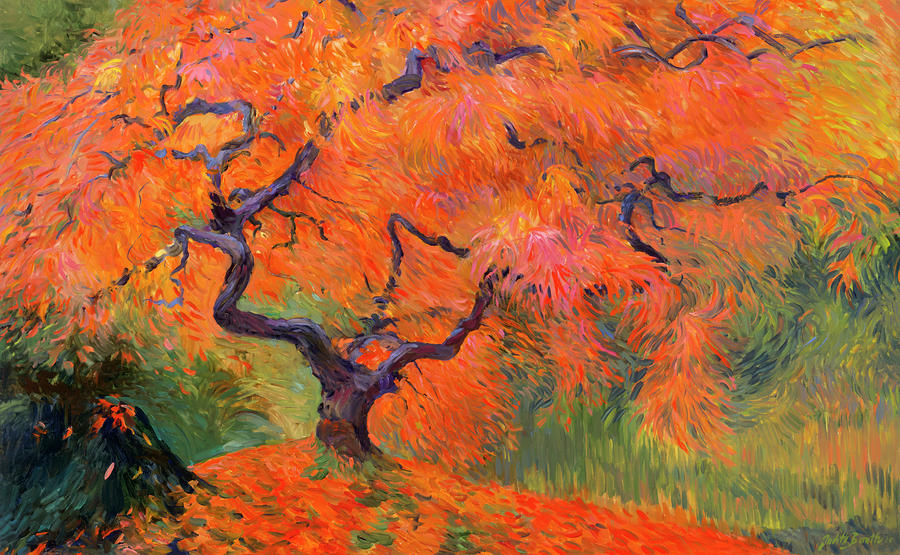 Japanese maples have served as inspiration for many artists over the course of time. Find out about the tradition of Japanese maple oil painting and where it stands today.

Gardening enthusiasts are not the only group of people fascinated by Japanese maples. Rather this wonderful category of trees has inspired many artists over time to produce artwork with the Japanese maple as their main theme.

Taking up the Japanese maple as a focal point in their art work is not something new to Japanese artists. The history of Japanese art reveals many art specimens dating back to the times when the Japanese garden concept was being explored to its fullest.

The depiction of maple trees in such paintings was not very detailed because they were shown as being part of an entire scene. Contrary to this certain artists took the tree by itself as their subject matter and attempted to replicate it in the most realistic manner. A section of the Japanese maple paintings looks almost like a botanical study of the species.

This is not to say that the Japanese artists didn’t get conceptual with the maple tree. Since the maple tree was and still is considered to add serenity to the Japanese garden it became recognized as a symbol of serenity, peace, beauty and magnificence.

Hence we find much artwork abstracted and inspired by the feeling generated by Japanese maple trees. The artists have sought to capture the seasonal change that occurs in the trees. The Japanese artists were very experimental with regards to the conceptual paintings that they came up with taking the Japanese maple as their source of inspiration.

Others have concentrated on specific parts of the tree. There is plenty of Japanese maple art concentrated on the leaf designs that are found in the various trees. Detailed studies of maple tree leaves come across as fine paintings to decorate your homes and offices.

In modern times Japanese maple art has taken to new heights. Today you will be able to find all kinds of fashion accessories ranging from T-shirts to caps and pendants to wallets with some sort of symbolic or realistic representation of the Japanese maple.