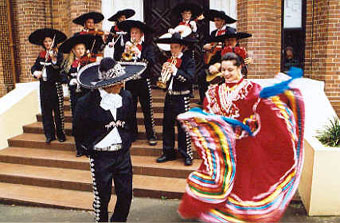 The culture and traditions of all countries and regions are diverse and that is the reason why their festivals and events are so unique. There are a few things by which a particular country or culture can be recognized and one of which, especially in Mexico, is music. It is difficult to determine whether it is the Mexican culture that has impacted Mexican music or the other way round. However, the present form of Mexican music is not all that similar to the one that has traditionally been practiced in Mexico; it has evolved over the years. However, the basics are the same and a touch of those special Mexican drums and guitars can always been distinguished.

Talk about traditional music and the first thing that will be presented in Mexico will certainly be Mariachis. The style is supposed to have come into being after the French intervention in Mexico. It is the intermingling of cultures that brought forth this amazing style of music that has now become something of a symbol for Mexico.

Mostly, this music style if played at weddings, in fact, the meaning of the word “Mariachi” is Marriage in French. However, marriages are not the only place for this music; it’s almost ubiquitous in Mexican functions and events. It was also an integral part of religious celebrations and rattles, reeds, drums and flutes were used in musical performances. However, it has also gone through an evolutionary phase and today guitars, trumpets and violins have taken the place of those old instruments.

This style of music is not all that old as it was first introduced around forty years back and originated in the state of Sinaloa.  The basic characteristic of this style is that string instruments are obsolete. Tubas, trombones and trumpets are relied upon heavily in this style of music.

This style of music can easily be considered as one of the oldest styles of music in Mexico. It’s been the way of playing music for the rural people of Mexico for more than a century.  Pertaining to that rural life and the ranches, the name of this music has been coined. Patriotism, love and care are the features of this style as these are the characteristics that most rural people usually are bestowed with.

Suffice is to say that Mexican traditional music is something that has not yet lost its shine and spark. It certainly has gone through various changes and evolutions, but is today still going strong.

Mexico
Going on vacation to Kino bay Mexico? Looking for a good hotel deal or

Mexico
Going on vacation to Cabo San Lucas in Mexico? Want to know where the