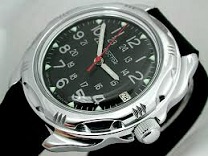 Vostok Watch Makers Inc. was the official supplier of Russian military watches to the Soviet Union’s defense department from the year 1965. The company specializes in producing military watches and mechanical diver watches. Apart from this it also supplies watch parts to other brands.

Formed during World War II, Vostok was formed as an industrial enterprise and eventually turned out to become the biggest watch factory in the world. Its Christopol Watch Factory has the honor of being the flagship of Russia’s watch industry. The factory specializes in producing each and every part used in their watches and continues to produce some of the finest watches in the world today.

Vostok has created some renowned masterpieces from the time it was formed. “Amphibia” was one such stainless steel watch that was equipped to handle a depth of 200 meters. “Komandirskie” is another famous watch created by them. It was also known as the “Commanders watch”. An updated version of both these watches was unveiled in 2008 and 2007 respectively. The quality, packaging and precision of these watches is world class.

All the watches that Vostok produced for the military were embossed with “ЗАКАЗ МО СССР” that meant that the watches were ordered by the ministry of defense, USSR. These watches went through stringent quality control measures and could only be sold via Voentorg stores, as they sold only to those military personnel that could produce a valid military ID proof.

This watch dates back to 1958 and is a true diver’s watch. The watch is quite heavy and weighs about 309 grams. Unlike earlier Russian watches this watch does not contain radium and  is not radioactive. This model uses the hand winding system.

These watches were also produced by Vostok and have three watches in its collection: The Soviet Gold Watch for Generals, The Soviet watch for Admirals and The Soviet KGB Watch Silver face. All these watches are mechanically wound and one complete winding would give you an uninterrupted working for 40 hours. The accuracy guaranteed by the watch is -20/+40 seconds in a day. The watches are embellished with 27 ruby jewels. The watch is water resistant up to 20 meters, shock resistant and dust resistant too. They come in an attractive bronze body and stainless steel back cover. The seconds and minutes are marked in Phosphorous to enable seeing in the dark. The watches are extremely durable and look classic.

Russia
Russian hair extensions have created a revolution in the hair styling industry. Read our