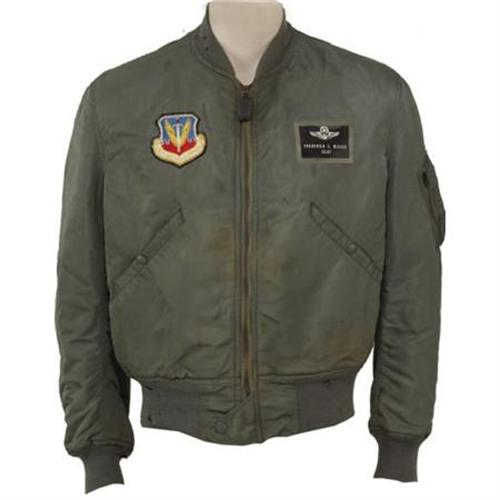 The back of the leather jacket has a silk escape flag which is stitched on along with the blood chit with all the information pertaining to the pilot. The reason for that is that the person wearing it could be identified and anyone who returned a rescued American pilot would be rewarded. The jacket has the message and details printed in different Oriental languages, which include Korean, Chinese, Manchurian and Japanese.

The main reason for this is that the region is home to a number of different Oriental languages and dialects. The dialects and languages printed on the jacket were important to cover all the possibilities in order to facilitate the rescue operations for USAF pilots in case of emergency.

The front side of the jacket has two theater made panels which identify the 49th Fighter Group along with the 9th Fighter Squadron, which both flew F- 84 fighter jets. The jacket is named after a test pilot who served on the USAF known as N. C. Evans.

Most of these jackets are available on auction and comprehensive descriptive literature comes with them to authenticate their originality. It is important to check the dimensions, presale estimates and the overall condition of the Korean War the jacket.

It is actually a term that is now used by U.S. Navy as part of its uniform but prior to that it was issued with the military specification number M-422. It was brought into the US Navy uniform in the 1930s and then standardized by the 1940s under the specification the M-422A.

Later on it was renamed as Army Navy jacket three or ANJ 3,  and replaced the A-2 jacket which is by far the most recognized and popular of the US military jackets. That is the reason for the current name and title of Army Navy jacket three or ANJ-3. Eventually, when the M-422A replaced the beloved USAF A2, this iconic Korean War flight jacket went on to become a collector’s item.

South Korea
Want to learn about undesirable discharges during the Korean War? Read on to discover