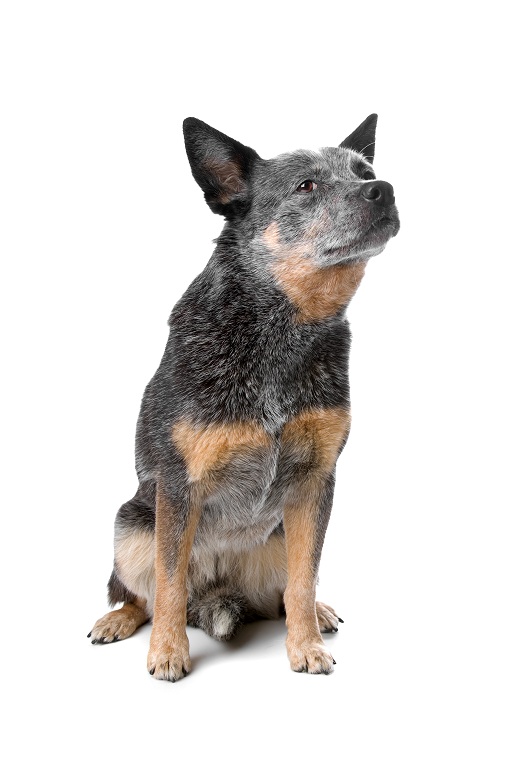 Do you want to pet an Australian cattle dog and would like to know about its temperament? Are you interested in learning about the various dog breeds from Australia particularly the cattle dog? Then read our informative guide….

The cattle dog from Australia as the name suggests in a herding breed designed in Australia for the exclusive purpose of herding cattle over long distances and inhospitable terrain. However, today it is so much more than just a working dog; the versatile breed is an intelligent and loyal companion; a courageous worker and a loving family pet.

The cattle dog is a midsized breed with a short coat; there are two main color forms; black and brown. The hair is distributed evenly on a base coat of white which gives the animal an appearance of being blue or red and that is what had earned them the name of red and blue heelers and their habit of herding cattle by nipping at their heels. There was also a clone of this breed developed in Queensland which were eventually known as the Queensland Heelers to demarcate them from the heelers bred in New South Wales; However, in time the term was used for all Australian Cattle dogs.

Like all other working dogs, cattle dogs from Australia are very energetic, hard working intelligent and alert with a fierce independent streak; they respond well to training and are not generally aggressive; however, they can be fiercely protective of their owners and form a strong attachment with them and all other things that they consider to be their possessions. Their physical traits and the short coat make them easy to maintain and groom.

Two of the common age related ailments that are observed in the breed are blindness and deafness. Both conditions can be hereditary or may be caused due to an accidental injury. Apart from these two health conditions, the cattle dogs from Australia are healthy and incredibly sturdy with a compact body and strong structure. The average life span of the breed is twelve to fourteen years. Australian cattle dogs are a lot more than just herding dogs, it is not unusual to see the breed participating in a range of activities such as agility and obedience competitions or enjoying a day out in the park with their owners. They are also commonly used as therapy and assistance dogs. A stocky body is not appreciated in the breed as it interferes with agility.

Apart from the two primary colors of red and blue it is also common to see other colors such as chocolate and cream. Red healers are uniformly tanned while the blue healers can be blue, blue speckled or blue mottled with black or tan marking on a white base coat.

These dogs are easy to maintain and do not shed more than once a year; a few warm baths a year and frequent brushing is all it takes to keep these pups looking as good as new.