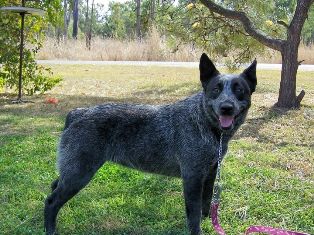 The most unique factor which separates it from other breeds is the fact that it does not have a tail which is docked. The Blue Australian Stumpy Tail Cattle Dogs from Australia give birth to pups that are naturally born with tiny stumpy tails.

According to the breed standards the tail does not grow more than 4 inches in length at full extension. It is quite interesting that most of the tails are missing in the working dog category. This characteristic is centuries old and goes back to Britain.

These dogs were bred and there was a customary exemption of taxes if the docking tails were part of the characteristics of the working dogs. Unfortunately this saving of money resulted in the mutilation of other dogs to escape taxation.

Even though the tax benefit was abandoned by 1796, the custom of docking survived. It is still practiced today, especially on sporting dog breeds.

In the 18th century these dogs, which were short tailed and utilized for droving, were called Curs and were claimed to be a cross between the terrier and sheepdog which was considered sometimes to be a prized animal. It was actually equivalent in value to an ox when it came to the Welsh herdsman.

The Blue Australian Stumpy Tail Cattle Dog is very quick and prompt in reacting to situations. When observed in a crowd of loud and noisy people the dog shows a lot of courage as well as intelligence. It requires minimum guidance and is especially beneficial when managing livestock and cattle like goats, sheep, cows and even poultry.

Evolution of the Blue Coat

The blue coat of this stumpy tail dog is actually a mixture of grey, white and red hair, which is thickly interspersed together. It gives it a very speckled look that normally spreads throughout the body. This is not fiber colored in a roan or merle color, but originates from a blend of other colored hair. They have very oily hair on the body, which is quite ruffled and looks very woolly and is used as an under coat in winter.

In order to reclaim the characteristic of the stumpy tail only the short tailed dogs were mated in order to eliminate the long tail dogs. Today you can see the latest Blue Australian Stumpy Tail Cattle Dogs, which are the true breed. These quality-sired champion dogs actually give birth to litters have little or no tail.

The Blue Australian Stumpy Tail Cattle Dog is quite efficient in the field with cattle. It is it is known as a tireless worker and as it is bred continuously its population is rising to become much more common. It has a lot of endurance and makes a courageous and loyal companion. The dog has become exceptionally popular in Canada and other countries.