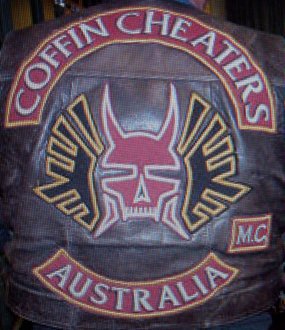 The Australian Coffin Cheaters have distinct requirements and attributes that are sought after in members. Many of the veterans describe the desired attributes of a successful Australian Coffin Cheaters member this way. The life as a biker is a tough one and requires a lot of integrity coupled with strength of character. Additionally, it is essential for the bikers to understand thoroughly the modern biker philosophy.

Most of these gangs are outlawed and there is a lot of negative publicity initiated mainly by the media and self-serving police authorities. It is felt by most of the members of the Australian Coffin Cheaters chapter that the laws regarding organized crime are abused by people in power. Unfortunately outsiders to society are almost always looked at by those in authority as groups having high potential for criminal activities. In fact, not only would the outlawed gang members of the Australian Coffin Cheaters be affected by a change in the law, these policies would affect right-to-life activists, human rights activists as well as trade unions, students guilds and minority political parties. It’s a well-known fact that bikers set up a united front when any chapter member is on the stand for involvement with illegal activities or outlandish behavior. Most of the clubs frequented by bikers as well as the bars have actually banned the bikers’ colours. This is inteneded to disassociate themselves from establishments that support the likes of the Coffin Cheaters Australia.

In fact, the Australian Coffin Cheaters chapter disputes the logic that biker gangs were involved in a higher number of crimes and any of the misdeeds committed by their members are described individual acts based on the personal disposition and character of that person. In fact, the group the Coffin Cheaters Australia would never own up to indulging in criminal activity and disrupting the societal order willingly. Even though there is a lot of violence within such groups, it rarely spins out of control and affects those who are not biker or gang members. Mainly violence and altercations occur because of the rather rough nature and individualistic character of the bikers, which is fiercely maintained by each member. Hardly ever are crimes and violent situations related to turf wars or drug-related feuds. Even though there is violence generated by the gang members, it is mainly a part and parcel of their lifestyle and disposition, rather than active involvement in crime and illegal activities. Or so the organization claims.

Australian Coffin Cheaters are most often involved in runs, which basically form the raison d’etre of their existence. These are the extensive road trips that members undertake in smaller groups. People often wonder how an outsider becomes a member of any outlaw motorcycle gang. According to the members of the Coffin Cheaters Australia chapter the basic requirements are good character, integrity and a willingness to be part of a group. Equipment required for being a biker is, obviously, a good souped-up Harley Davidson. As is the case with every gang member, with the biker gangs most of the time is spent in clubs where they hang out and interact with each other. The Coffin Cheaters are seeking to demonstrate to the public that they are individuals who are principled, honest and fiercely independent. Time will tell. In Australia there are many tough laws and especially the anti-biker laws in South Australia are very strict.