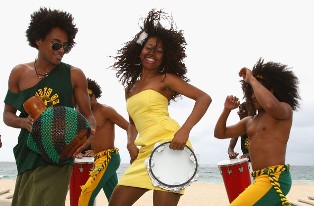 The land that brought us the samba and bossa nova loves music and loves to dance. Before going on the razzle in Rio or strutting your stuff in Sao Paulo, learn more about Brazil’s rich heritage in music and dance.

Brazil’s mixed and multicultural past has come together to create some of the finest music and dance on the planet. With influences from three continents there are perhaps three main genres that one should learn about before going to Brazil.

The samba is perhaps the most popular of music in Brazil and also very well known overseas. The music and accompanying dance originated from black slaves living in Rio de Janeiro. It is said that it was first performed at the Rio carnival in 1917. Due to its roots lying in slavery, the music naturally has many African influences. This is most noticeable in the unique rhythm which is linked to the Angolan tam-tam. This gave samba both its characteristic music and dance steps. By the 1930s, and due to the impact of radio, samba was huge. This decade saw what was to become the “Golden Age of Samba”. One of the most famous musicians of this time was Carmen Miranda, who starred in many Hollywood musicals. She was also well known for her costumes that used fruit – an image that still pervades to this day. During the 1950s and 60s samba’s popularity as Brazil’s number one music and dance diminished due to the change in tastes.

The bossa nova entered Brazil’s music and dance scene in the 1950s. At the time it was seen as fresh, modern and challenging music and took not only Brazil but the world by storm. It appeared at a time of change and was very much associated with the university movements. Bossa nova brought with it a new way of singing and playing music; one that was less operatic and more natural, quieter and relaxed. Leading figures included Joao Gilberto, Baden Powell, Nara Leao and Elis Regina.

Just as the bossa nova followed the samba, the new sound called tropicalismo burst onto the music and dance scene of Brazil in the late 1960s. The core message of the genre was that all styles were valid. As a result figures such as Gilberto Gil, Rita Lee and Gal Costa incorporated various styles and traditions in their music. This resulted in some very innovative sounds as instruments previously unheard of together were blended to create a whole new sound.