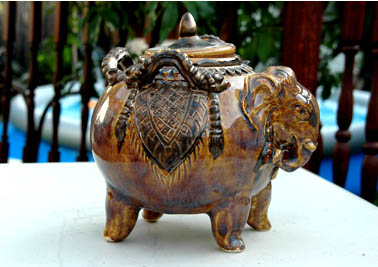 Discover the history and origins of Cambodian pottery along with their techniques & contemporary usage.

Some of the earliest Khmer pottery remains found around the country are said to be dated to as far back as to 5000 BC. Even ancient kiln sites have been discovered at Phnom Kulen as well as around the Angkor region, also at Sisakhet, Surin and Burirram provinces in present day Thailand. Only recently over 30 different kilns have been found at Choeung Ek, popularly known to tourists as one of Cambodia’s ‘killing fields’ during the time of the Pol Pot regime.

Cambodian ceramics mainly would be used in everyday life, to carry water and rice and was also utilized as a food bowl. Around the 10th century ceramics from other countries especially China began, although there isn’t any evidence whether the strong and denser local Khmer ceramics were ever being exported.

The wealthy are thought to have used household utensils of bronze or imported ceramics. The innovation of animal-style wares in shapes of birds, elephants, rabbits and other animals appeared in the 13th century, and even now similar shapes are made as boxes of wood or silver.

Khmer potters used two pottery tools, first was the pottery wheel, on which the clay pot was thrown and then molded into shape and second was the anvil technique where tools such as paddles and anvils were used to shape the pot.

The ancient clay kilns were capable of firing stoneware ceramics to a temperature of 1000 – 1200 degrees centigrade. Potters would also fire their pots in the open air at a temperature as low as 700 degrees centigrade, where the principal glazes being used were green and brown, covered with a natural and earthy wood-ash glaze with iron, dark jade-greens or deep olive colors. But they can also vary to nearly white, gray, honey yellow or brown. Khmer ceramics also can be dual-glazed, dual-colored and unglazed.

Although in the countryside, old traditional procedures are still used. Many of the pottery pieces are hand-turned and then fired upon an open fire with no glaze. The end product is then used as cooking pots and other household items.

Although these pots and wares are not waterproof and crack in the firing still the local rural Cambodians continue to make these ceramics and they continue to use them. Now traditional pots are displayed for sale on oxcart that would be stacked with straw so that the pots do not break through the bumpy uneven journey they make from the country side to the larger cities. And these are most commonly purchased by the middle class for their everyday household utilities or sometimes even as merchandise for tourists.

Many NGO’s have cropped up in order to preserve Cambodia’s rich heritage of ceramics, as well as aiming to help people revive and reintroduce Khmer ancestral pottery techniques and maintain the development of contemporary Khmer ceramic art.