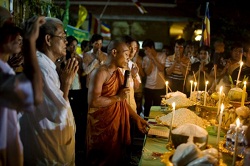 An overview of the religious beliefs, concepts and history of Cambodian people and getting to know the origins of the different religions that exist in Cambodia.

Hinduism and Buddhism have been the two most dominant religions to flourish in Cambodia since ancient times. The people of the region gladly welcomed these two religions thousands of years ago and have since then adhered to them.

Hinduism in particular has been the dominant religion in the region. It has played a massive role in shaping the social structure of the country right from the time when it was accepted by the Angkor monarchs. The monarchs gladly accepted the concept of Deva-Raja which revered them as a manifestation of the god shiva in human form.

There are many temples still surviving from the Angkor period that were built as a tribute to the Hindu gods. The architecture of the Hindu temples display all sorts of vivid artistry that is characteristic of Hinduism. The temples were made using the best of building materials which is why they have managed to stand the test of time. Inside the temples they were decorated with fancy ornaments and sculptures that displayed the craftsmanship of the Cambodian people.

The second most popular religion to flourish in Cambodia through the ages has been Buddhism. The particular sect that gained dominance in the region is known as Mahayana. Although the dharma came into the region round about the same time as Hinduism it was always second to Hinduism in terms of the number of followers it had. Over the years however Buddhism rose in popularity and became the state religion back in the 13th century. An overwhelming majority of the local population amounting to almost 95% of the people profess the Buddhist faith in Cambodia today.

The 1970s saw a massive oppression of Buddhists at the hands of the Khmer Rouge regime. The Buddhist monks were brought down from their highly revered position and forced to contribute to social growth by engaging in manual labor. As a result many Buddhists were executed and tortured along with which many of their temples were also demolished.

Alongside the pantheist religions exists the presence of the monotheistic Islamic community in Cambodia. Although this community is not as large when compared to those of other faiths it still has a strong presence in the Cambodian community. The Muslims of Cambodia also suffered intense persecution at the hands of the Khmer rouge regime which was highly intolerant of any form of organized religion because of being atheistic in nature.

There is also a significant Christian community present in Cambodia. The Roman Catholic version of Christianity is the most dominant in the region due to a history of catholic missionary activity in the region. The Christian population of Cambodia was quite overwhelmingly large at one point in time but has diminished since then.

Apart from these well established religions there are the hill tribes of Cambodia that have their own beliefs. These are small communities that live in scattered places with each group having particular beliefs of their own.