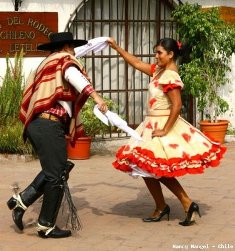 Interested in Chilean Dances? Want to know more about the Chilean National Dance? Read our guide for facts and info on the dances of Chile…

Dance is a prominent part of Chilean culture. The nation has a number of different dances that have been present and practiced amongst the locals since ages. These dances have now developed many modern variations and are well known around the world.

The Cueca, a unique dance form native to Chile, is credited as being the country’s national dance. The dance form has obvious Spanish and African influences. It is believed that the ancient traditional dance of Peru known as the Zamacueca was the inspiration behind the development of the national dance.

In its essence the Cueca is believed to be a courting dance. The performers, men and women enact a scene depicting courting between a rooster and a hen. The performance has the male character acting aggressive while the female pretends to be demure and elusive.

The national dance is further broken down into two categories with respects to the geographical location.

In this variation of the Chilean national dance the singer takes the spotlight whereas the instruments are being played in the background. The steps of the dance in the Cueca Chilota are much lighter with more emphasis on the musical performance.

There is no singer in this variation of the Chilean national dance. Rather it is totally instrumental with the main instruments being the drums, tubas and trumpets amongst others. You will never find a vocalist to be accompanying the music in the Northern Cueca. The music has a slow tempo with dance steps coordinated accordingly.

In these kinds of dance performances there are only women dancers. They pin up photographs of their men on their dresses and dance alone habitually. This form of the dance performance was developed in protest of the Pinochet dictatorial regime as well as in memory of the lover.

The choreography of the Chilean dance is what sets it apart. Basically there is an imaginary circle with the male performer in one half and the female in the other. The dance always begins with the man extending out his arm as an offer to the woman to join him. This action is conducted in sync with the background music. The dance partners stand face to face at a distance of about three meters from each other. Before the couple engages in full fledge dancing they begin by clapping their hands to the music.

Turkey
Want to learn more about the Horon Turkish dance? Read on for facts and