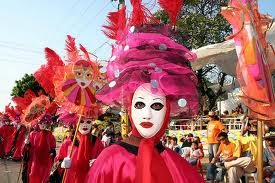 Colombian festivals are based on various carnivals celebrated round the year, and they mirror the vivid cultural and social heritage of Colombia. Read our guide for more facts and information…

Colombian culture is adorned with unique festivals, which are celebrated zealously and with a lot of fervor. Celebrated locally as well as nationally, some festivals last for a single day, while others may go on for several days at a stretch. Some of its festivals, such as the Medellin Flower Festival and Barranquilla Carnival are quite popular.

It is Colombia’s largest flower exhibition, which has been a popular celebration since 1957, and is usually held in the first two weeks of August. The flower parade known as Desfile de Silleteros is the highlight of this festival, and the main parade takes place on 11th August. Campesino processions go through the town with big wooden constructions on the back, and with vivid decorations of fragrant flowers.  With flower arrangement competitions, classic car parades, music, dance and a beauty parade, the celebrations are colorful and lively.

It is among the biggest carnivals of Latin America, and has a long historical significance. Known as Carnaval de Barranquilla in Spanish, it is known to be the second biggest carnival parade after Rio de Janeiro. It is usually held in the month of February and celebrations consist of street dances, parties, traditional music and drinks.

Known as Feria de Cali in Spanish, this fair is held from 25th December to New Year’s Eve, and it is among the famous national events of Colombia. The Salsa marathon concerts that are conducted by Salsa bands are among the highlights. Horse-riding parades, group dances and masquerades are some of the amusements.

Carnival of Blacks and Whites

Held from 4th to 6th January every year, this festival originated during the Spanish reign, when African slaves were permitted to celebrate on 5th, and their masters reciprocated on 6th. On the day of the Blacks (5th January), the slaves smear black color and other cosmetics on each other and play on the streets. On the day of the Whites (6th January), the masters smear white color and cosmetics like talcum on each other. There is a parade with display of floats, music, group dances and people wearing fancy costumes, with prizes for the best display or performance. Artisans spend a whole year preparing the floats with elaborate and original designs, created exclusively for the occasion.

Other festivals of Colombia

USA
Every year, Budweiser along with Cadillac sponsor a Breckenridge ice carving festival. The annual