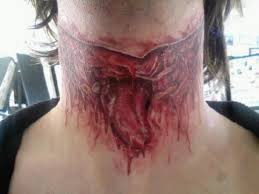 Colombian necktie is a gory execution method, in which a knife is used to slit the victim’s throat, and the tongue is drawn out through the cut, mainly to frighten or intimidate the people who see the corpse. Read our guide for more facts and infor

Throughout history, violent methods of execution have been in practice, resulting in the gory end of war victims, criminals and even victims of drug wars. Glasgow smile, burying alive, Colombian necktie and crucifixion are some methods just to name a few. Infamous execution methods have been carried out to spread a psychological warfare by scaring and intimidating people who happened to encounter the body of a victim.

In this method, the victim’s throat is slit with a knife or a sharp object, and the tongue is drawn outside from the open wound. The tongue is pulled towards the sternum rendering the name necktie. The victim dies of blood loss or of asphyxiation. The killing method is very disturbing and is meant to warn others, such as informers of illegal activities.

The origin of the Colombian necktie

This method of execution came into existence around 1950, during the ten-year period of La Violencia in Colombia. This period of chaos in the Colombian countryside began after the murder of a leader called Jorge Eliecer Gaitan. There is a common assumption that it was invented by the Colombian drug lord Pablo Escobar of the 1970s, but it came into existence much earlier during the La Violencia, along with several other atrocious techniques of killing. It is estimated that about 200,000 to 300,000 people lost their lives, and several others were injured and misplaced.

The Glasgow smile and Colombian necktie

Glasgow smile results from cutting the face of the victim from the mouth edges to the ears, and the cut leaves a scar, which looks like a smile. This practice began in Glasgow, Scotland, and also spread to Chelsea, London, due to which it is also called Chelsea grin. Gangs involved in this practice intended to leave a message to other members, and if the cut is too deep, the victim could bleed to death. Though, the resultant psychological warfare from Glasgow smile and Colombian necktie is similar, the latter results in death, rather than a wound.

It was in 1985, that the term Colombian necktie was used in The Washington Post, an American publication, in a review about Code of Silence, the Chuck Norris movie. Another reference was made in 1986 in Running Scared.

It is believed that Colombian necktie was used to execute informers in the illegal drug industry. However, there is still no evidence that Colombian criminals exported this method to the US during the 1970s cocaine upsurge, and whether gangsters carried it out on live persons or on corpses.

Colombia
Columbia rain jackets are among the best waterproof clothing made of breathable material, and