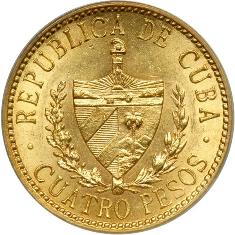 Coins from Cuba tell the story of the island’s independence from Spain near the turn of the 20th century, as well as Cuba’s 1959 revolution and the tenuous relationship between Cuba and the US in the years following. Today, though American dollars

ANACS stands for the American Numismatic Association Certification Service. It is a third party grading body that used to be run by the American Numismatic Association. Since 1990 it has been run by Amos Press. ANACS grades Cuban coins, which circulate in the Cuban economy in denominations of 1 centavo (abbreviated to “cent”), 2 cents, 5 cents, 20 cents, 1 peso and 3 pesos. The acronym CUP stands for “Cuban peso.”

Because of the very storied history of the relationship between the US and Cuba, plus the advent of new currency in 1997, and the 1959 Cuban revolution, pre-revolution coins from Cuba can be quite valuable, with a golden 1 centavo coin from 1943 retailing for about $12.00.

Looking all the way back to 1898 and the Spanish American War, a silver coin was issued to collect funds for the war against Spain. On one side it shows Leonor Molina’s profile and the Cuban coat of arms on the other side. Molina was the American cousin of the treasurer of the US-Cuban delegation in the Spanish American war. Once the Cuban Republic was founded, the coin – originally a souvenir fundraiser – was accepted as currency. Today one of these 1898 peso coins is worth around $2,500.00

Cuban currency is based on the Cuban peso, both the Cuban Convertible Peso and the CUP. The Cuban Convertible Peso (CUC) was introduced into the Cuban economy to drive foreign currencies – specifically the American dollar – out of circulation. In many ways, the CUC is in most ways equal to US dollars. Whereas dollars used to be quoted in hotels, restaurants, and tourist shops, now the CUC is used as a substitute. Since 2004,  US dollars have not been accepted, and exchanging them for CUC incurs a 10% commission.

In 1881, the Cuban peso was pegged evenly with the US dollar, but in 1960, after the Cuban revolution, Cuba’s peso began being pegged to the Soviet ruble. After the dissolution of the Soviet Union in 1991, the peso rapidly lost value until the exchange rate was 125 pesos to one American dollar. Now it fluctuates around 24 pesos to the US dollar.

Today, Cuban currency does not have an official value outside of Cuba. Tourists use the CUP for staple goods. Local citizens are paid in CUC but pay for normal expenses with CUP. The exchange rate is applied by Cuban banks and exchange bureaus. Since March 2005, the ratio for exchanging CUC for CUP has been 1 CUC to 24 CUP, and it is 25 to 1 when converting CUP to CUC. The CUC is valued at approximately $1.08, and is the currency used for luxury products.