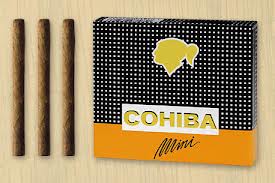 A cigar is not inhaled by the smoker like the cigarette is. However, it is enjoyed on the mouth palette as the smoker takes a drag and lets the smoke roll on his taste buds. Therefore a good blend is highly coveted because it will feel and taste amazing to the smoker if it is created painstakingly and by classifying the leaves and blend carefully. This is the main reason why standard brands across Cuba are very popular from centuries. You can actually rely on what kind of flavor you will get from a blend created by known names which were established in the late 18th century in Havana and other cities of Cuba.

Essence of the Cuban Mini Cigarillos

One of the most popular cigarillos from Cuba is the Cohiba Mini Cuban which is a rich and flavorful cigar popularized in the late 18th century. These Cuban cigarillos are available in packs of hundred cigars which are packaged in 20 packets of five each. This helps retain the robust flavor of the cigar but if you want to keep it fresh and in excellent condition then it is recommended that you purchase a humidor. This is basically a moisturizing cabinet which balances out the moisture in a particular confined environment. It is important to keep Cuban cigars at a maximum humidity of 60 to 70% in order for them to retain the flavor and texture of the cigarillos. Apart from this you need to store them at a temperature that ranges between 16 to 18°C so that they do not flake in excessive heat or crack in the cold.

The Cohiba Mini Cuban cigarillos are not a very old brand and in fact were introduced into the local market in the year 1968. It was manufactured for the purpose of presenting it to Cuban government officials and had a medium body flavor and texture. It was also known as the protocol cigar due to its affiliation with the government officials. However it was mass marketed from the year 1982 and became extremely popular. The original sizes of the series included Lancero Cuban and the Special blend along with the Panetela. The other exclusive brands like the Robusto Cuban which had a full flavor along with the interesting Exquisito and Esplendido were added in to the range by the year 1989. The Siglo range was launched in the year 1992 as a commemorative Cuban Mini cigarillo to commemorate the 500th year of the discovery of the Caribbean by Christopher Columbus. It is interesting to note that this brand was originally manufactured in Havana, Cuba but the premises were later on extended to the Fernando Perez German factory.