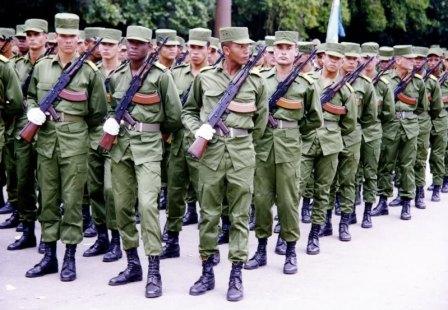 The Cuban army is synonymous with revolutionary zeal. This is reflected also in the choice of uniform which represents enthusiasm and simplicity at the same time. The Communist Party follows the use of imperialist uniforms and in order to be part of the revolution every member of the Army and revolutionary team must conform to the guidelines of the dress code established by the party.

The Cuban army uniform is popular amongst men and young boys who have a rebellious streak and may belong to any country all over the world. Even though they might not understand the communist manifesto, if they want to revolt against capitalism then they tend to support this look just to set them apart from the regular youth of the society.

Another hat is known as the Castro and was popularized by Fidel Castro the Cuban leader. It is quite difficult to find the uniform hat that looks like the one Fidel Castro wears which is the standard Cuban military style hat available in green. It’s a soft cotton fabric hat with a peak cap that sits on the forehead and fits the head snugly.

The shirt of the Cuban army uniform is a long-sleeved flat green shirt with pockets on both sides of the chest. Apart from this an all green T-shirt is utilized by most of the junior members of the Army. The army fatigues are not camouflage pants and are basic flat green pants utilized by the Army. An interesting piece of information on the Cuban uniform is basically that the uniform pieces were stolen by revolutionaries from the government armies hence they ended up looking very similar. The basic difference came in the type of hats and handspun necklaces that they wore.

The belt on the Cuban Army uniform is a combat style belt which is sported on top of the shirt. The uniform is completed by combat boots in which the pants are usually tucked. They are generally black toe combat boots which are finished with green webbing and are extremely versatile and comfortable to wear.

The main idea for the Cuban army uniform was extreme simplicity and the use of basic items like fatigues and jackets on top. They do not have special emblems or accessories and the color is the Army olive green which is utilized across the board from the shoes to the hat and jacket or fatigues. The uniform is not standard issue and is maintained by each party member because the color and style are generic but the item can be selected according to the personal preference of the wearer.