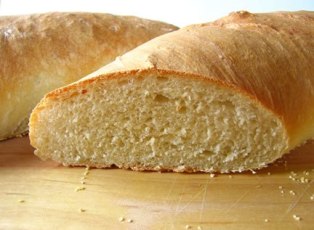 Cuban bread is similar to other “baguette” shaped breads except for the inclusion of a small amount of lard or vegetable shortening. As far as making it, the technique is similar to making any other bread: mix ingredients, let rise, punch the bread

Both Miami and Tampa, Florida claim to be the home of the best Cuban bread in America, though the first bakery in America to bake Cuban bread was probably La Joven Francesca Baker, which was located in the Latin Quarter of Tampa that is also known as Ybor City. In the late 1800s, Cuban bread in Tampa cost 3 to 5 cents per loaf. In Ybor city, bread was once delivered every morning just like milk. The houses that had bread delivered had a big nail driven into the outside frame of the door, and the bread delivery man would impale the loaf right on the nail. The delicious, fresh bread certainly didn’t stay around long enough to go stale!

The loaves are about three feet long and a cross section would look more rectangular than the round cross sections of French bread. The crust is hard and papery, but thin enough to easily bite through to the soft middle. In more frugal times, the dough was stretched thin to make it last longer, which resulted in not only the long shape, but the characteristic air pockets. Traditional Cuban bakers press a moist palm frond on top of each loaf before baking, which creates a shallow dip along the upper crust. The frond is removed and discarded before the bread is eaten.

Besides making excellent Cuban sandwiches, fresh Cuban bread makes a good breakfast, particularly with butter and a cup of cafe con leche (strong coffee with scalded milk). Distinctive regional breads are staples of diets around the world, and Cuba is no exception. It is also enjoyed greatly by Cubans who live in America.