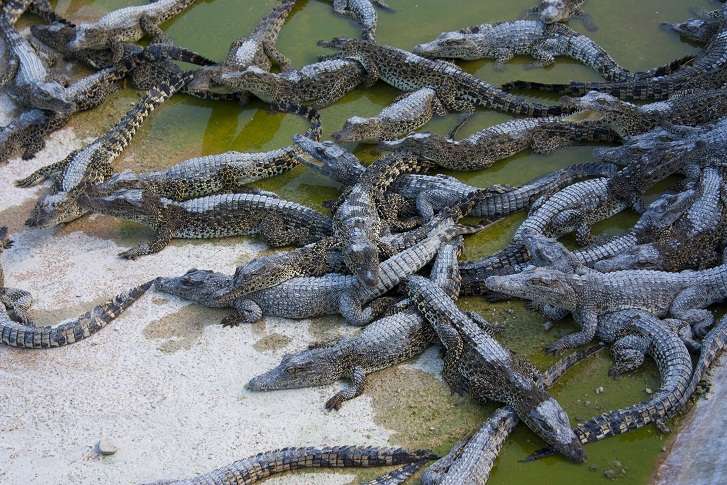 The Cuban Crocodile is a small but powerful reptile. This crocodile grows to approximately 2.4 m in length and packs a lot of power in its jaws and body. This crocodile is endemic to the Zapata Swamp and the Isla de Juventud and is not found anywhere else in the world. The main reason for this is that it’s an endangered species and numbers have diminished considerably, creating a new confined habitat for this Cuban crocodile which it uses to reign throughout the Caribbean waters.

Unique Characteristics of the Cuban Crocodile

The Cuban crocodile which is endemic to two main areas in the Caribbean has some unique characteristics which differ from other species of crocodiles. First and foremost it has a bright colored skin when it becomes an adult crocodilian; the scales on the skin of the crocodile are extremely pebbled and rough when compared to other crocodilians.
Another fascinating trait is that their legs are strong and longer than most other crocodilian species and this makes sense because it’s a terrestrial species of crocodile and roams the land freely. The long legs support its gliding and walking activities across land and are therefore stronger than most other crocodilian species.

The Cuban crocodile is considered an intelligent species and can be dangerous in captivity such as their colony created in Gatorland Florida, many observers have noticed that they exhibit behavior which is similar to crocodile hunting in groups or packs. This has prompted observers and colonists to keep them in isolation from each other because the power of one crocodile is multiplied manifold when its intelligence is combined with other crocodilians.

What The Cuban Crocodile Likes To Eat

The Cuban crocodile inhabits freshwater areas like rivers and marshes and feeds on anthropoids and smaller fish available in the swamps and marshes. Apart from this it likes to feed on crustaceans and young and small mammals when it reaches adult size. It is interesting to note that fish and turtle are preferred by the crocodiles and they have a characteristic feeding technique which allows them to consume mammals like a turtle. They basically have blunt teeth on the back of their mouth and use these to crush the hard shells of crustaceans. They use the jump techniques to feed on mammals which are at a distance. This includes whacking their powerful tail and leaping ahead from the water to snatch animals which are perched on tree branches which hangover the swamps and marshes.