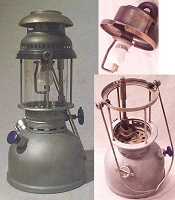 Petromax lanterns that were used by the German Army were pressurized lamps which could burn on several fuels, and served the purpose of lighting, heating and cooking for soldiers during the Second World War. Read our guide for more facts and informat

Pressure lamps made their debut after kerosene lamps, wick lamps and mantle lamps. They have a fuel tank with a pump to pressurize the liquid fuel such as kerosene or paraffin. The burner is located at the top and consists of a mantle, which incandesces due to the heat from the gas flame. They are more sophisticated than mantle lamps, and provided a good lighting solution in the 1900s. They are known as Tilley lamps in the United Kingdom and Coleman lamps in the United States. Petromax lamps that originated in Germany work on vaporized paraffin and are known for their military significance.

Petromax is the brand name of a type of paraffin lantern designed by Adolf and Max Graetz in 1889 at Berlin. They managed Ehrich & Graetz, their family business. Paraffin has a high calorific value and burns with a blue flame, radiating heat as well. Hence, the process of making gas from paraffin led to the invention of the Petromax lantern. The lantern derives its name from the main inventor’s name ‘Max Graetz’ and the word ‘petroleum.’

In order to start the burning process, the lantern is preheated using wood alcohol. The closed fuel tank containing paraffin is pressurized with the help of a small hand pump. The mantle, consisting of incandescent chemical-coating, produces heat, which in turn vaporizes paraffin. The vapor is mixed with atmospheric air, and blown towards the mantle to burn. Owing to the pressure, the light produced is very bright. Moreover, the pressure facilitates a steady fuel-flow, thereby providing a constant light. A significant advantage for the military was that it could burn on different kinds of liquid fuel, such as kerosene or paraffin, mineral spirits, gasoline, diesel, citronella oil or any kind of liquid fuel, based on alcohol. In fact, any flammable fuel worked well with these lamps.

Use of German Army Petromax lanterns

During the Second World War, Petromax lanterns were used by the soldiers to provide light and warmth, and also served as stoves to prepare or heat food. It has also been used by campers during camping and similar other outdoor activities. The mantle is the most fragile part of the lantern, and is expensive as well. Besides the utility features of portability, brightness, heat radiation and versatility with regard to fuels, the lamps are highly reliable.

The appearance and design of Petromax German Army lamps have changed over the years, and they are still used by Para-military groups and NATO forces worldwide. Today, they are manufactured in several countries, and latest models are made with brass or nickel coated materials.