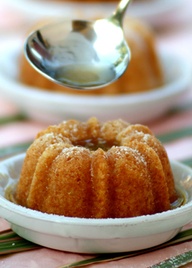 Cuban desserts are a great way to enjoy Cuba’s culinary traditions, which were developed over time using the abundance of fruits and sugars grown in Cuba. Everybody’s had flan, but Cuba has some other traditional desserts that are just as worthy of

Is it any wonder that Cuban desserts are so good? After all, Cuba is an island whose main crop is sugar cane, and Cubans have never been afraid to use it. Cuba is known as the Sugar Bowl of the World, and also grows many fruits, such as mangos, guava, and bananas. Put this abundance of common ingredients together and you get some of the most amazing desserts you’ll ever have, like Cuban flan. Three other luscious Cuban desserts are Coconut Sweetmeat, Bread Pudding, and Peaches Chantilly

In a large sauce pan, mix grated coconut with molasses, sugar, and lemon juice. Stir thoroughly, then cook over a medium heat. Continue stirring so that it won’t stick to the pan. You may have to continue stirring for 20 minutes or so while the mixture thickens. When it is thick enough and the coconut is cooked thoroughly, remove it from the heat. Form 1 to 2 inch diameter balls on a baking sheet lined with wax paper or greased aluminum foil. Allow to cool, then enjoy.

Preheat the oven to 350 degrees. Crumble the bread into a big bowl. Pour the milk over the bread. Add all the other ingredients and mix well. Dump mixture into a greased, large baking dish and bake for 45 to 55 minutes.

In a sauce pan, heat the milk with the cinnamon stick and salt. In a large bowl, whip the egg yolks with sugar and flour. Slowly stir in the milk mixture so that it doesn’t cook the egg yolks. Put everything back into a pan and return to the stove. Using medium heat, warm the mixture, stirring constantly until it turns creamy. Allow to cool, then chill thoroughly (12 hours or so). To serve, alternate layers of cooked cream mixture, peaches, and marmalade, cream mixture, peaches and marmalade. Garnish with whipped cream. Makes enough for 6 servings.