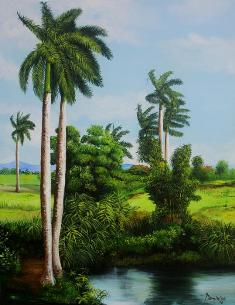 Want to learn about a particular Cuban fine arts artist? Read ahead to find out about the style of lesser-known Cuban artists…

Cuban art is extremely lively and colorful reflecting the spirit and vivaciousness of the Cuban people. There are many self-taught artists who have become popular due to their in born craft of painting vivid scenery and heartwarming scenes of the Cuban lifestyle and landscape. From the depths of the ocean to the beautiful coastal landscapes and the mountainous travails and everyday slices of life of the Cuban people, Cuban fine art and paintings are a treat for the eyes.

Impact of the Caribbean Landscape on Fine Arts in Cuba

Alfredo Cecilio Rodríguez Cedeño was a Cuba-based artist who was self-taught. He did attend the community cultural Center hometown of Bayamo. He was even schooled by professors at the visual arts school in this Cuban city. He is adept at creating different kinds of paintings but his specialization is the creation of rural landscapes which depict the everyday life of Cubans. His artwork is the combination of traditional art and painting combined with realism and his main focus is on environmental themes.

This Cuban artist was awarded national prizes along with provincial and municipal awards and was an acclaimed participant of the highly celebrated Cucalambé Festivals in Las Tunas.

In 1963 Enrique Francisco Amat Rodríguez was born in Havana and grew up to be a mechanical engineer who graduated from the prestigious University of Havana. By the mid-1980s he had developed a fondness for creating ceramics and displayed many of his art pieces during exhibitions.

By the 1990s he progressed onto watercolors and then finally oil paintings. As a skilled artist his work was acknowledged and accepted by Cuba’s leading art institutions which were the Center for the development of visual arts and the Cuban Foundation of Fine Art. His artwork is popular throughout Latin America, the United States of America as well as many European countries.

The 1996 graduate of the Instituto Superior de Arte in Havana, painter and fine arts creator Luis Enrique Camejo now serves as Professor of Art at this university. He has been shown in international exhibitions across the Caribbean and Latin America along with some European countries like Germany and the United States as well as Canada. His art is created in an Impressionist style which creates an interesting mix of modern-day architecture combined with landscape or bovine elements.

A well-known Cuban artist, Lorenzo Linares Duque or Linares to those familiar with him was born in 1952 in Cuba and went on to graduate in 1973 from the  Camaguey which was his hometown. He went on to take up the art department at the University by 1977 and then furthered his skill by professional training and obtained a Master’s degree in fine arts from Ukraine by attending the Institute of Art in Kiev.

The subjects of his paintings are common Caribbean lifestyle scenes from his hometown where he lives till today. He has had individual as well as combined exhibitions all over Cuba and is a celebrated Cuban landscape artist.