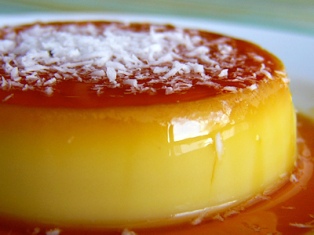 In Cuba, flan is similar to the flan and creme caramel made elsewhere in the world. It is a custard made from common ingredients like cream and eggs that is baked on top of a layer of hot sugar sauce. When the flan is ready to serve, the hot sugar sa

Flan is similar to creme caramel in that it is made with milk or cream, eggs, vanilla, and sometimes gelatin. Sometimes flan includes a layer of caramelized sugar at the bottom. Usually it is made in small ramekins that hold one serving. The ramekins are inverted onto a plate so that when the flan slides out, its crunchy sugar is on top. Quite often in Latin countries, flan is served plain, without the caramel sugar layer. A lot of times Latin American restaurants distinguish between regular flan and dolce de leche, or flan served with milk caramel sauce which is added after the flan is baked and inverted onto a plate.

Large, traditional Cuban flan can be made in a casserole dish or in an empty 12 oz. coffee can. Here are the ingredients:

Put the sugar and a tablespoon of cold water into a saucepan on low heat. Allow the sugar to melt until it becomes a syrup. Take the sugar syrup and pour it into the empty coffee can. For now, set it aside.

Preheat the oven to 350 degrees Fahrenheit. Separate the eggs. You’ll be using the yolks.

Combine the 4 egg yolks in a large bowl. Stir in 1 can of condensed milk, 1 1/2 cups of water, and two tablespoons of vanilla extract. Blend well until it starts to develop a froth. Pour into coffee can.

In a medium sized, oven-proof saucepan, fill with water to the height of the flan and place the coffee can in the pan of water. Bake for 30 to 45 minutes. You’ll know it’s done if there is a little brown froth around the edges. Also it will look a lot like custard that has set. Remove it from the oven when it’s done. Free it from the can by using a knife around the edges of the flan. When the can is cool enough to handle, put a plate on top of the can and invert it so that the flan slides out onto the plate. As soon as it’s sufficiently cool you can enjoy it. This makes about 8 servings. Refrigerate any leftovers promptly.

Flan dates back to ancient Rome, when Romans first started raising chickens and had a surplus of eggs. The earliest flan was more savory than sweet, but the Romans also had sweet versions of flan made with honey. The fall of the Roman empire, however, did not mean the fall of flan. Flan survived in Spain as a sweet dish, and the Moors added almonds and citrus fruits. Today it is a specialty of Latin countries, but is enjoyed in many other places around the world.