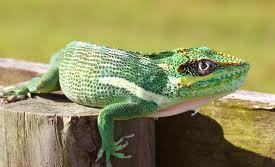 Want to learn how to identify a Cuban Knight Anole? Read on to discover the characteristics of Cuban Knight anoles…

The Knight anole is part of the family of lizards which is classified as the polychrotidae species. It is found profusely in the Caribbean region and has migrated well into the United States through all the plants being imported into the country. Generally the eggs of the Knight anole are found in the plantations and these consequently hatch in different countries where the plants have been exported to.

Unique Characteristics of the Knight Anole

The Cuban Knight anole can morph its skin color and change to blend into the surroundings if it requires protection in its territory. Apart from this the knight anoles tend to change color according to their moods also. Anoles have a lifespan of 3 to 5 years and if they are taken care of properly in captivity then they can grow to be seven years old.

The Cuban Knight anole is a larger variation of the species and is known to grow up to 12 inches or more and certain citations have shown that the male gender of the Cuban Knight Anole species can reach up to 20 inches in length making it a very big lizard.

Feeding Habits of the Knight Anole

The Cuban Knight anoles feed on invertebrates which are easily available in the areas that they inhabit. These include insects like crickets, spiders and moths which are the most commonly available insects in the area. They are known to eat and feed any time that a small meal attracts them and it’s easy for them to eat the insect.

Habitat of the Cuban Knight Anole

The Cuban Knight anole is very territorial and a land animal therefore it inhabits bushes and short trees which offer it a good hiding place along with shrubs that are dense and offer good coverage with the foliage. In terms of man-made structures you can find the anoles wondering on walls and fences. Although small in size this lizard is extremely territorial and has different areas where it enjoys the sun, rest in the shade and a specific perch which serves as a look out point to scan the territory for would be predators along with having a special hiding place in the event of danger.

Aggressive Behavior of the Cuban Knight Anole to Protect Its Territory

If another lizard tries to invade the area that is occupied by a particular anole then there is a display of aggressive behavior which includes an action similar to push-ups and hissing sounds. Apart from this the spine is raised and the dewlap is fanned out and exposed to make the lizard look larger than it is. The males are known to fight by biting at the neck to dissuade another lizard from invading its territory.

The dewlap on the neck of the Cuban knight anole has a cartilage that has erectile properties and can fan out to make them look larger. Similar to basic lizards found at home they can also break their tail in different pieces which continue to wriggle while the lizard escapes from a predator. They have some sticky features on their toes which lets them cling to surfaces like walls and fences and prevent them from falling.