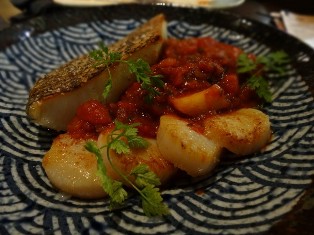 Looking for a Chilean Sea Bass Recipe? Read on to get one of the all time classic Chilean sea bass recipes…

The Chilean sea bass is a large fish vaguely shaped like the cod. It is found in great numbers in the cold waters of the southern hemisphere and is particularly a deep swimmer. Over the years the Chilean sea bass has become one of the most popular fishes in the western world.

There are a number of reasons that contribute to the popularity of Chilean sea bass. It is a large size fish which delivers optimum sized fillets. The white meat of the fish has a mild flavor which is complimented by a fine firm texture. The meat is high in fat content which makes it difficult to overcook the fish. Add to that the inexpensive cost of buying the fish and you have all the reasons in the world for buying this fish.

This is one of the all time classic Chilean sea bass recipes that is easy to make yet will have you licking your fingers when you are done. In order to prepare the sea bass in this manner you will require some olive oil, red bell peppers, a thinly sliced onion, some minced garlic, peeled and seeded chopped tomatoes and salt and pepper to taste. You will divide the one and a half pound Chilean sea bass into four equal portions for the dish.

Start off by heating up to two teaspoons of olive oil in a skillet. To this you will be adding the onions and peppers and cook while stirring until the contents wilt. Throw in the garlic and cook until it catches the fragrance. Next up add the chopped tomatoes along with a dash of salt and pepper. Keep simmering the contents until you find them to become tender and blended perfectly well. This should take around fifteen minutes to the maximum. Make sure you keep this mixture warm.

On the side take the fish out from the fridge and lightly season both sides of it with salt and pepper and leave to be for a few minutes. In another skillet add the remaining oil and heat making sure you coat the entire surface. Add the fish and cook until you see it turning brown. This should take not more than two minutes. Following this you should place the skillet under the broiler. You need not turn the fish at this moment.

After four minutes under the broiler turn the fish over on its other side and continue to broil. Consider you fish ready when a skewer can pass easily through the thickest part. This should take around three minutes more. The fish should be served with the browned side up and you should pour the pepper mixture on top of the fish as well as around it to enjoy this delicious Chilean sea bass delight.