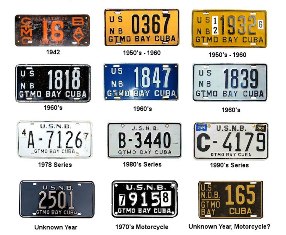 License plates in Cuba are a subject of interest to Cuban Americans and dealers in replica license plates in the U.S. The Cuban government uses a combination of plate color, three numbers, and three letters to designate which province a car is regist

If you go to Cuba, you won’t see a car registered in any other country besides Cuba, discounting the U.S. military in Guantanomo Bay. The sequence of letters and numbers have specific meaning, and have since 2002 when the entire Cuban license plate themes were upgraded.Ordinary license plates have a single digit number in the lower middle of the plate that refers to the type of vehicle.

The second letter on the plate, coupled with the plate’s color tells where a person works or comes from. An “A” on a white plate is for government ministers and other high officials, but on a light brown plate, it is for government officials lower in rank. The letters D, E, F, G, and H on yellow plates are for private vehicles. “K” on a yellow plate is for vehicles and motorcycles owned by foreign nationals, while on a light brown plate it is for foreign companies, journalists, and religious organizations. R on a yellow plate is for private motorcycles and the so-called coco taxis. S, T, U, V, and W are for state owned vehicles. Y and Z are for state owned motorcycles, while any number or letter on a black plate is for a foreign diplomat.

Rental cars have license plates starting with the letter “T” (for turista) that is followed by two letters and four digits. They are dark green. U.S. military cars in Guantanamo bay use license plates containing one letter and four numbers with the text “U. S. N. B.” and “Gtmo Bay Cuba.” Once you go by all the clues contained in the color, the sequence of letters, and the numbers on a Cuban license plate, you have a fairly comprehensive sketch of the person driving it, which to the Cuban government, is the whole point.