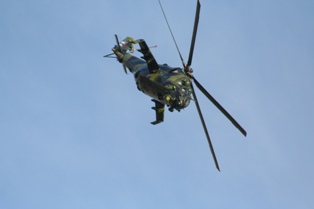 In July 1913 Cuba created the Cuerpo de Aviacion del Ejercito de Cuba (CAEC). It consisted of one Curtiss Model FS. Though Cuba declared war on Germany in 1917 during World War I, the war was over before Cuba engaged in any combat. A few years later,

When Fulgencio Batista y Zaldivar was instated in 1934 after the 1933 overthrow of President Gerardo Machado y Morales, the aviation service was divided into two parts: an air corps and naval aviation corps. By this time the organization had a fighter squadron, an observation and bombardment squadron and a military aviation school.

After the 1941 attack on Pearl Harbor, Cuba received several dozen aircraft through a lend-lease program with the U.S. After the signing of the Rio Treaty in 1947 Cuba received combat aircraft and transport aircraft for the formation of a Transport Squadron.

But as the 1950s ended, so did the Cuban government. On January 1 1959 Batista resigned and fled to the Dominican Republic. On that same day the new Cuban government formed the Fuerza Aerea Revolucionara (FAR). Just over two years later, the Bay of Pigs invasion took place, where CIA and Cuban exiles’ unsuccessful assault reached Playa Giron. Eventually, one supply ship, the Houston, sank, and 114 Americans were killed. Cuban losses were never clear but were thought to be worse despite their having prevailed. During the Bay of Pigs incident, Cuba was flying American made B-26s and British Sea Furies. By May, the USSR had sent Cuba 60 MiG-15s, enough to make three combat squadrons.

About a year after the Cuban Missile Crisis in October 1962, Cuba obtained several MiG-21F-13 aircraft and became the first Latin American country to acquire planes that could go Mach 2.

From 1975 to 1988, Cuba was involved in a war in Angola, defending the leftist MPLA from South African and Zaire troops that were backed by the U.S. After Zaire and South African forces retreated, the Cubans remained in Angola until 1991 on the side of the MPLA government in the Angolan Civil war. During this time, Cuba used MiG-17s, MiG-21s, and the MiG-23s, supplied by the USSR.

Today, the exact numbers and models are not verified, but Cuban military aviation makes use of several variants of MiG21s, MiG23s and MiG29s, and about 20 transport planes. The Cuban Air Force also has approximately 20 Z-326T flight training aircraft of Czechoslovakian origin.