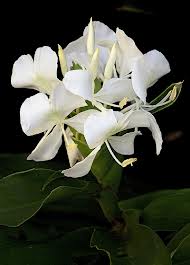 One of the Cuban national symbols is the species of Jasmine which is endemic to Cuba and also known as the white butterfly. This was popularized with Cuban women during the war of Independence when they wanted to send coded messages to the battlefield. The flower was selected to symbolize a pure yet rebellious nature and the desire for independence.

The white butterfly is scientifically known as the Hedychium Coronarium Koenig. This fragrant flower has the most pleasant and noticeable fragrance towards evening and late-night as it releases its aroma of the sunset. Due to its delicate petals it is often called the white butterfly, the butterfly Jasmine and the white Mariposa depending on the region of Cuba that it grows in. This species of Jasmine is endemic to the Cuban island and thrives independently in private gardens of Cuban homes along with the humid and moist riverbanks and lagoons found all over the island.

The rich and moist soil conditions prevalent in the Caribbean allow this plant to thrive and bloom profusely in the island. They require a sunny climate and the Caribbean is famous for its temperate climate all around the year. You require a shallow water ground and sunny position for this plant to thrive but it is not a very strong plant and cannot survive temperatures below 2°C. The sunny Caribbean is the best place to plant the seeds for this beautiful flower and it can be propagated by sowing the seeds when it is ripe. For best results this can be done in a greenhouse which is maintained at 18°C, when you sow the tubers they should be covered with soil only lightly and well drained.

The national bird for Cuba is the Tocororo which have the scientific name of Priotelus temnurus. It is a bird that hails from the quetzal family, and is considered indigenous. The reason why this bird was selected as a national symbol of Cuba is because of the plumage that matches the red, white and blue of the Cuban national flag.

Cuba also has a national tree which is actually not native to the country and can be found all over the Caribbean islands and most countries in South America. However the Royal palm tree is considered a national symbol of strength and integrity of the Cuban people. This is mainly because this tree stands upright during the heaviest rains and Gale force winds.

The Cuban flag was hoisted for the first time in 1850 in the Cuban city of Cardenas in Matanzas. It is designed with three solid blue stripes which mark the administration districts which the Cuban island was divided into at that point in time. The two white stripes denote respect towards the freedom fighters of the Cuban nation and reflect their selfless intentions and purity. There is a single white star which denotes absolute independence and liberty from all sorts of oppression.
Cuba has a myriad of international airlines that fly through it which include its national airline the Cubana Airline and other foreign airlines like the Mexicana Airline and Iberia among others.