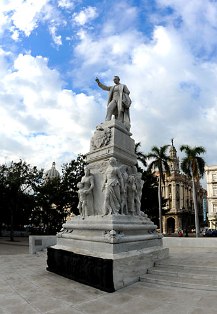 Cuba has produced numerous famous personalities during the 110 years or so since it became independent of Spain. The unique blend of cultures, politics, and relationships between Cuba and The U.S. and between Cuba and the Soviet Union produced many n

While Cuba has a broad and fascinating history, when most people think of Cuba, they immediately think of Fidel Castro, and they imagine him in a green billed cap with his unmistakable beard and face. Castro was born in 1926. At 19, World War II was ending, and Castro went to the University of Havana. He earned his law degree in 1950. Castro was an opponent of the Cuban leader Fulgencio Batista, and he managed to drum up plenty of attention and support of his position. Castro has always been noted for his nationalism, patriotism, and anti-imperialism. Castro staged an attack on an army facility in Santiago de Cuba in 1953 and was imprisoned for two years. He fled to Mexico and organized a group of freedom fighters. In 1956 Castro, his brother Raul, and Ernesto “Che” Guevara, returned to Cuba and began training guerilla soldiers. In December 1958 Batista was driven from Havana and Castro became Cuba’s leader.

But Cuba isn’t all politics. It has a rich cultural and artistic tradition as well. A Cuban bandleader named Desi Arnaz made a huge name for himself in America as an actor and the husband of Lucille Ball, and also as a gifted bandleader and the primary architect of the “three camera” style of television sit-com production. Gloria Estefan has had a long and distinguished career in American pop music.

Famous athletes from Cuba include baseball’s José Contreras, and NASCAR driver Aric Almirola. American fashion would not be the same without the great work of designers Isabel Toledo (who designed First Lady Michelle Obama’s Inauguration Day suit) and Narcisso Rodriguez, famous for the elegant lines of his creations.

Cuba may be a relatively small country, but it is the home country of an amazing array of talent, from political to athletic to artistic.