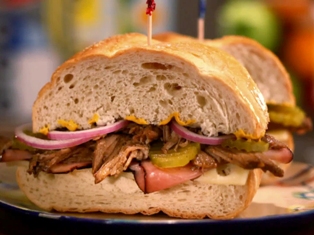 Looking for a pressed Cuban sandwich recipe? Want to know the secret behind making it to perfection and exactly what ingredients to use? Our guide to Cuban sandwiches gives you the facts & information you want.

Apparently, its not only the cigars for which Cuba is famous, rather there are lot of other things including the now world famous Cuban sandwich. The time when this sandwich was first noticed to the world is still a little ambiguous. However, whenever these little culinary delights came into this world that certainly was a lucky day for millions who enjoy these sandwiches regularly, whether Cuban or not.

Making a Cuban sandwich is not the world’s most tedious job, however, the quality of ingredients is the defining factor. Cuban bread is the most important thing for these sandwiches. Ultimately, any other type of bread will do the job, but to get that truly authentic taste you should accept no substitutes. However, do keep away from a long thin French loaf.  Ham comes second in importance and it is followed by roasted pork, cheese, pickle and last but certainly not the least is mustard.

Now here goes the trick. First of all, just heat up your frying pan and cut the bread loaf in halves. Apply a layer of mustard or butter on those halves. There is a specific order in which the rest of the sandwich ingredients are used. First of all, add some pickles, roasted pork, then comes ham and finally, cheese. Add these ingredients in a layer form and add according to your wish. Traditionally Cuban sandwiches are quite generous on the ingredients, although if you are counting calories feel free to adjust accordingly. That’s an underlying tip. After adding all the ingredients, put the sandwich in the pan and then press it. Compression is something that really needs to be applied in good amount. It’s because of this compression that these sandwiches are also known as “Cuban Pressed Sandwiches”. After compressing, cook it until the bread gets brown which won’t take more than two to three minutes. After making sure that both sides are equally grilled, your Cuban sandwiches are ready to be served.

However, some little variations in recipes can be seen in different places, for instance, Genoa salami is added in Tampa Florida which is not really admired by the traditionalist. There is another form of sandwich that is famous in Oriente as here garlic is used to rub with the bread and that’s the disparity that separates these sandwiches from that of the traditional ones. Along with these, some people also use marinated pork in the making of these Cuban sandwiches.

Now, what are the don’ts of making a Cuban sandwich? Well, first of all try not to use  ham with the taste so strong  that it might become the only thing you can feel in the sandwich. There are other ingredients as well and they will be noticed when a relatively sweet ham is used.  Secondly, an overly heated pan should be avoided as the bread will take more of the heat and the cheese will not melt. Mayonnaise or tomatoes are something that is quite often used in making these sandwiches; however, while making a strictly traditional Cuban sandwich, it’s always better to stay away from these. Take care about these things, use original Cuban ingredients and the taste of these Cuban sandwiches will certainly be out of this world.