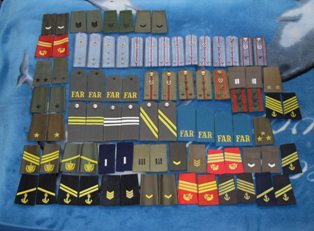 The Cuban Revolutionary Armed Forces have their own military insignias and have unique Cuban shoulder boards which were popular and in use till 1999.

Design Of The Cuban Shoulder Boards For Junior Ranks

The private, private first class, corporal and sergeant of the Cuban Revolutionary Armed Forces wear shoulder boards in olive green which carry the title of Fuerzas Armadas Revolucionarias which is the Cuban translation of the Armed Forces. This is printed in yellowish gold color and absolutely plain for the uniform of the private. There is one stripe for the uniform of the Cuban shoulder board of the private first class followed by two stripes for the Corporal and three for the Sergeant.

Design of The Cuban Shoulder Pads For Senior Ranks

The shoulder boards for the brigadier general, Maj. Gen., Lieutenant and general are denoted by a stripy checkerboard pattern in olive green at the base which is bordered by two thin red stripes on each end. The major emblems utilized for these four Cuban shoulder boards are olive branches and stars. Two olive branches crossed at the ends are placed at the base of each of the shoulder boards for these four ranks. The rank of Brigadier General is denoted by one star, two stars for Maj. Gen., three stars for Lieutenant General and finally four stars for the General.