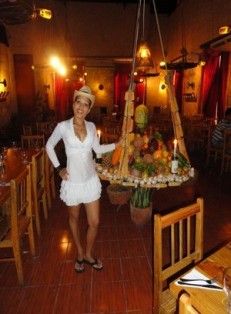 Finding good restaurants in Havana can be difficult due to two factors. Firstly, restaurants in Cuba suffer from food shortages due to the US embargo against Cuba, making the choice of food on offer at restaurants in Cuba erratic. Secondly, Cuba is a socialist country in which private enterprise is not encouraged, so there is no competitive reason for one restaurant in Cuba to be better than any other restaurant.

If you are booking a package tour to Havana Cuba then be sure to pay for buffet breakfasts and dinners at the hotel restaurant in which you are staying. Not only will it work out cheaper eating your meals at the restaurant in the hotel, but in many cases the quality of food is better, and you do not have to suffer the intolerably slow service at public restaurants in Havana Cuba.

Like everything else in Cuba, restaurants are a government controlled operation. Cubans dining at restaurants are charged in the local Cuban money, while foreigners will be charged in dollars. In general, the standard of food and service at these restaurants is poor. However, in recent years efforts have been made to improve restaurants that cater for independent tourists in Cuba.

Havana Cuba does not have much choice with regards to fast food restaurants. There are some government run restaurants in Cuba that specialise in selling pizza and other similar snack food. If you are after some quick snack food while on the move in Cuba, then a good alternative to a restaurant is a street stall widely available in towns throughout Cuba, which specialise in selling things like pizzas and sandwiches along with cool drinks.

Service at restaurants in Cuba

The government in Cuba have recently made legal the opening of small privately run restaurants. In general the quality of food and service at these restaurants is much better than at government run restaurants in Cuba. Finding these restaurants in Cuba can be difficult as they are not allowed to advertise, and are restricted in size to only a dozen seats.  Always check prices before ordering a meal at a private restaurant in Cuba as the ones that cater to tourists may try to rip you off. Also prices fluctuate a lot more than in Western countries. An ordinary meal at a private restaurant in Cuba will cost you about 4-5 Euros and consist of typical Cuban food such as roasted chicken, fish or pork.

Portions at restaurants in Cuba

Portions served in restaurants in Cuba are definitely on the small side, this is especially so if you are coming from North America where restaurants serve huge portions. The reason for these small portions is simply down to scarcity of food supply. Depending on what you are ordering at the restaurant and how hungry you are, you may want to order two portions to meet your fill.