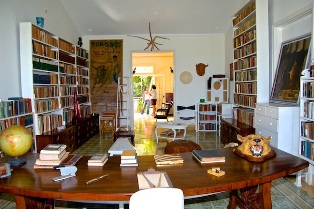 The Hemingway Museum in Cuba is housed in what used to be the private residence of the famous American author Ernest Hemingway.  The Hemingway Museum, which is usually just referred to as Finca Vigia by Cubans is located a little about 15 km’s outside of Havana. Finca Vigia, which means lookout farm, was the name of Hemingway’s residence when he lived there. The Hemingway museum is not a site of mass interest, but the pleasant surroundings and original furnishings that Hemingway and his wife would have used make this place a must see for anyone interested in the life and works of Ernest Hemingway.

The Hemingway Museum is not a museum in the typical sense of the word. There are no carefully constructed exhibitions our guides to take you through the museum. However, this museum is second to none in giving its visitors a real insight into what Hemingway’s life would have been like in Cuba, and how this consequently influenced many of his most famous novels. Inside the Hemingway Museum Cuba you can find up to 9,000 books belonging to the personal library of Hemingway. Furthermore, there are about 3,000 photographs from Hemingway’s private collection, many of which are of him or he took himself.

Hemingway was greatly loved by Cubans who in turn were deeply loved by Hemingway himself. Despite this, the Hemingway Museum has fallen into a sad state of disrepair over recent years, due partly to lack of funding as well as atmospheric conditions. The humidity was causing many of the books and papers that constitute the bulk of the exhibits at the Hemingway Museum to decay. Fortunately, in 2002 a delegate from the Hemingway foundation in the US began a restoration project that not only ensured the preservation of the Hemingway Museum, but also acted as a rare example of positive cooperation between US and Cuban parties.